Heartwarming story of strength and compassion -- Room for Hope 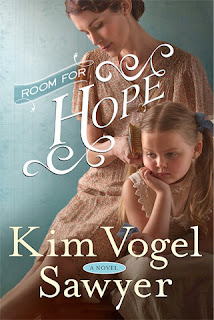 From the aroma of Neva's "savory vegetable stew" in the very first paragraph, to the "smile of pure hosanna" in the last paragraph, Kim Vogel Sawyer vividly engaged all my senses in her heartwarming story, Room for Hope.  Kim has crafted a beautiful story filled with strength and compassion, set against the backdrop of the Great Depression.

Neva and her children, Jesse, Randall and the other characters come to life on the page as their lives are turned upside down and they face a variety of challenges.  One of things that makes Kim's stories so fantastic is her ability to draw her readers into the almost real lives of the people she writes about.

If you love great historical fiction written from a Christian perspective, I'm sure you will enjoy Room for Hope -- as well as everything else Kim Vogel Sawyer has ever written!

Thanks to Kim and her publisher for providing a copy of the book in exchange for my honest review.

In a desperate time, can Neva find forgiveness for a grievous wrong—and make room for hope?

Neva Shilling has a heavy load of responsibility while her husband travels to neighboring communities and sells items from his wagon. In his absence, she faithfully runs the Shilling Mercantile, working to keep their business strong as the Depression takes its toll, and caring for their twins.

When a wagon pulls up after supper, Neva and her children rush out—and into the presence of the deputy driving a wagon carrying three young children. The deputy shocks her with the news that Warren and his wife have died, insisting it was their last request that the three children go live with “Aunt Neva.”

Neva’s heart is shattered as she realizes that Warren’s month-long travels were excuses for visits with his secret family. She wants nothing more than to forget Warren, but can she abandon these innocent children to an orphanage? Yet if she takes them in, will she ever be able to see them as more than evidence of her husband’s betrayal and love them the way God does?

Kim Vogel Sawyer is the highly acclaimed, best-selling author of gentle stories of hope such as What Once Was Lost and Through the Deep Waters. With more than one million books in print, Kim has garnered numerous awards including the ACFW (American Christian Fiction Writers) Carol Award, the Inspirational Readers Choice Award, and the Gayle Wilson Award of Excellence. She lives in central Kansas with her retired military husband Don. She enjoys travel, quilting, and spending time with her daughters and grandchildren.

Posted by Southern Gal at 5:35 PM No comments:

Put a smile on my heart -- Keeper of the Stars 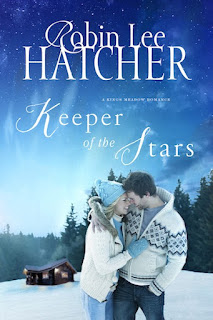 Robin Lee Hatcher put a smile on my heart with her latest book -- Keeper of the Stars. Even when following the characters through struggles of of guilt, blame, and uncertainty, there was always the sense that things were going to come to some good point of resolution.  And the "take-it-easy" pace of the story added to the sense of enjoyment I had as I read.

When Penny and Trevor met, they were both dealing with questions and hurts in their own lives. The only thing they had in common was their loss because of the death of Penny's brother Brad. Neither was particularly looking for a relationship, and certainly not with each other.

Robin takes her readers through a wide range of emotions as her characters find themselves on a journey of healing and growth. Revealing details of the past through Brad's perspective seamlessly puts all the pieces together in the current story. A theme of growing faith is a critical element in the transformations in the characters' lives, Penny's father plays a refreshingly strong role in that area.

Keeper of the Stars is part of the Kings Meadow Romance series but works well as a stand alone.  It is fun, though, to run across familiar names from the previous stories.

I highly recommend Keeper of the Stars to fans of great faith-based contemporary romance. Thanks to BookLook Bloggers for providing a copy of the book in exchange for my honest review.

Because it’s not always love at first sight!

When her mother died from pneumonia, Penny Cartwright was heartbroken. But now, after burying her younger brother just 12 years later, she is devastated. Anger, guilt, and sorrow cloud Penny’s mind, and the last thing she wants is to be reminded of her pain—but that’s exactly what happens when a stranger comes to town.

Trevor Reynolds has been chasing fame for more than a dozen years, but his musical career can’t get off the ground. While on the road, an accident kills his young drummer, Brad Cartwright. Trevor wasn’t behind the wheel, but he still blames himself… and so does Brad’s sister, Penny. Now Trevor finds himself in Kings Meadow, determined to follow through on his final promise to his friend.

Still feeling the pain of Brad’s death, Penny and Trevor must learn that forgiveness is the only thing that can heal their hearts. And if they do forgive, something beautiful may rise from the ashes of heartbreak. 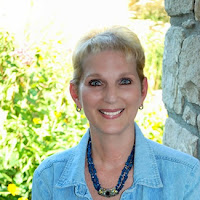 Best-selling novelist Robin Lee Hatcher is known for her heartwarming and emotionally charged stories of faith, courage, and love. She discovered her vocation after many years of reading everything she could put her hands on, including the backs of cereal boxes and ketchup bottles.

After fifteen years writing for the general fiction market and a change in her own heart, Robin began to write stories that included her Christian faith and values.

Winner of the Christy, the RITA, the Carol, the Inspirational Reader’s Choice, and many other awards, she is also a recipient of the prestigious Lifetime Achievement Award from both Romance Writers of American (2001) and American Christian Fiction Writers (2014). Robin is the author of over 70 novels and novellas.


Robin enjoys being with her family, spending time in the beautiful Idaho outdoors, reading books that make her cry, and watching romantic movies. Her main hobby (when time allows) is knitting, and she has a special love for making prayer shawls. A mother and grandmother, Robin and her husband make their home on the outskirts of Boise, sharing it with Poppet, the high-maintenance Papillon, and Princess Pinky, the DC (demon cat).

Posted by Southern Gal at 11:32 PM No comments: 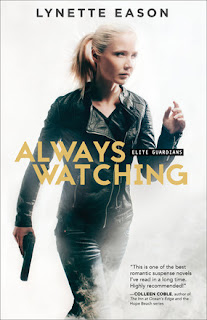 Always Watching is filled with the kind of fast-paced action I've come to expect from Lynette Eason. In fact, there just is not a spot to stop and put the book down . . . so I read the whole thing in one afternoon and evening! "Always guessing" is where I found myself as I read the book. Just when I would think I had solved the "who-dun-it," there would be another twist to the story.

The characters are fascinating to get to know -- from Olivia and her all-female team of Elite Guardians to their client Wade Savage and his daughter Amy, along with several others. Mixed in with the suspense is just the right blend of faith and romance. And I wonder if Mandisa knows one of her hit songs manages a mention in the story!

I highly recommend Always Watching to fans of great action/romantic suspense.  Thanks to Lynette and her publisher for providing a copy of the book in exchange for my review.

Intensity. Skill. Tenacity. The bodyguards of Elite Guardians Agency have it all.

When it becomes clear that popular psychiatrist and radio personality Wade Savage has a stalker, his father secretly hires Elite Guardians to protect his son. But when Wade's bodyguard is attacked and nearly killed, agency owner Olivia Edwards must step in and fill the gap.

Olivia's skills are about to be tested to the limit as Wade's stalker moves from leaving innocent gifts at his door to threatening those closest to him--including Olivia. But in her mind, even more dangerous than the threats to her life is the hold her handsome client has on her heart.

Lynette Eason is the bestselling author of the Women of Justice series and the Deadly Reunions series, as well as No One to Trust, Nowhere to Turn, and No Place to Hide in the Hidden Identity series. She is a member of American Christian Fiction Writers and Romance Writers of America. She has a master's degree in education from Converse College and she lives in South Carolina. Learn more at www.lynetteeason.com.

Posted by Southern Gal at 10:50 PM No comments: