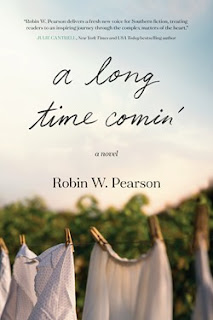 Robin W. Pearson is a new author for me, and I was impressed with her debut novel, a long time comin'. Being a southern girl myself, some of the setting and style of her story telling made me feel "right at home."
This story is not built around a lot of action or movement. Instead, it is filled with a lifetime of memories and complexities in family relationships. The relationship that forms the foundation for the plot is the one between Granny B and her granddaughter, Evelyn. Although they don't always see eye to eye and even have their moments of real conflict, what they share ends up having a powerful impact on their entire family. The author uses a well-crafted blending of narrative from the present and past to tell her moving story.
I recommend a long time comin' to fans of well-written, complex contemporary fiction. Because of some details in the story, I would suggest that it might best be suited to mature readers.
About the Book

To hear Beatrice Agnew tell it, she entered the world with her mouth tightly shut. Just because she finds out she’s dying doesn’t mean she can’t keep it that way. If any of her children have questions about their daddy and the choices she made after he abandoned them, they’d best take it up with Jesus. There’s no room in Granny B’s house for regrets or hand-holding. Or so she thinks.Her granddaughter, Evelyn Lester, shows up on Beatrice’s doorstep anyway, burdened with her own secret baggage. Determined to help her Granny B mend fences with her far-flung brood, Evelyn turns her grandmother’s heart and home inside out. Evelyn’s meddling uncovers a tucked-away box of old letters, forcing the two women to wrestle with their past and present pain as they confront the truth Beatrice has worked a lifetime to hide.

Robin W. Pearson's A LONG TIME COMIN’ earned a 2020 Christy Award for First Novel. Both her debut and her second novel, 'TIL I WANT NO MORE (February 2021), earned a Publishers Weekly starred review. They show how man's timeless love affair with God affects day-to-day relationships. Robin's writing sprouts from her Southern roots, and she has corrected grammar up and down the East coast, starting with Houghton Mifflin Company. Her family’s faith, life lessons, and life’s longings inspire her as a wife, homeschooling mother of seven, and author, what she blogs about on https://robinwpearson.com/mommy-concentrated/. They're the source of all the characters living and breathing in the stories waiting to be told about her belief in Jesus Christ and the experiences at her own kitchen sink.
Posted by Southern Gal at 6:09 PM No comments: 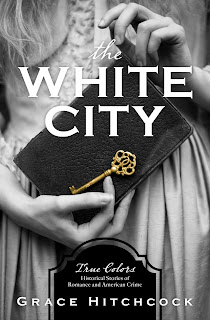 The White City (published in 2019) is a debut in two different ways:
(1) It was the first installment in the True Colors series.
(2) It was the debut novel of author Grace Hitchcock.
The White City is a very well-written story with interesting characters and an engaging plot. Winnifred Wylde is a dynamic young woman who is not easily stopped or distracted from her plans and ideas. Jude Thorpe is more restrained in his position as a Chicago policeman but manages to get himself caught up in Winnie's whirlwind. They, along with others, are easy to get involved with as the story builds.
Like the other books in this series, the story is a fictional tale built around an account of true crime in American history. I have read several of the books in the series and have enjoyed them all. This one differs from the others in that the crime seems to take a back seat to the romance. So, although the mystery element is definitely the foundation of the story, be prepared for much in the areas of romance and faith.
I recommend The White City to fans of Christian romance and light mystery. It was a pleasure to be introduced to Grace Hitchcock, and I look forward to reading more of her work which has followed this debut, including another installment in the True Colors series.
About the Book
Mysterious Disappearances Taint the Chicago World’s Fair.
While attending the Chicago World’s Fair in 1893, Winnifred Wylde believes she witnessed a woman being kidnapped. She tries to convince her father, an inspector with the Chicago police, to look into reports of mysterious disappearances around the White City. Inspector Wylde tries to dismiss her claims as exaggeration of an overactive imagination, but he eventually concedes to letting her go undercover as secretary to the man in question—if she takes her pistol for protection and Jude Thorpe, a policeman, for bodyguard.Will she be able to expose H. H. Holmes’s illicit activity, or will Winnifred become his next victim?
About the Author

Grace Hitchcock is the author of multiple historical novels and novellas. She holds a Masters in Creative Writing and a Bachelor of Arts in English with a minor in History. Grace lives in Baton Rouge with her husband, Dakota, son and daughter. Connect with her online at GraceHitchcock.com.
Posted by Southern Gal at 6:49 PM No comments: