The Keeper is "a keeper" 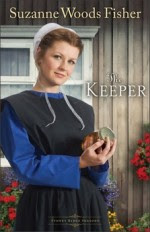 Julia Lapp is heartbroken -- or is it angry -- when her fiance calls off their upcoming wedding -- again.  And she is certain she knows who is to blame --The Bee Man!  When Roman Troyer brings his bees back to the community and then ends up staying longer than usual, right on the Lapp property, Lydia has to deal with a confusing mixture of feelings.  And to make matters worse, her father's failing health puts her in a position of responsibility for her younger siblings and the care of the family's Windmill Farm.  Will she be able to trust in God's care to heal her hurting heart and carry her through tougher times than she ever imagined possible?

This was another very enjoyable story by Suzanne Woods Fisher.  At some times, I felt that the story seemed a little disjointed; certain scenes seemed to not fit together smoothly.  Before the end of the book, though, the pieces fit together like a jigsaw puzzle.  And I have to admit that the big developments toward the end caught me off-guard but presented a beautiful picture of God's perfect plan.

Find out more by viewing this video trailer about The Keeper.

The Keeper is due to be released by Revell in January 2012.  I was lucky enough to win an advanced reader copy during a facebook author party.  Check out Suzanne's facebook page or go here to enter a contest where you might win an advanced copy, as well as some other prizes.
Posted by Southern Gal at 10:43 PM