Mixed Review -- A Sound Among the Trees 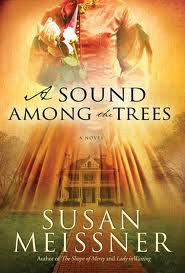 I had never read a book by Susan Meissner and decided to give A Sound Among the Trees a try.  After finishing the book, I’m left with mixed feelings about the story.

Marielle marries and moves with him and his two children to Holly Oak, the historic home of , the grandmother of ’s deceased first wife.  Shortly after moving, Marielle hears stories of the ghost of Susannah Page, ’s great-grandmother, who haunts Holly Oak.  doesn’t believe there is a ghost but is convinced that the house itself has some sort of hold over its inhabitants.  Marielle finds herself on a journey to sort out the truth about Susannah, Holly Oak, and the generations of women who have lived there.

The story has a lot of depth, and is told through the eyes of multiple generations --  particularly, Marielle, , and Susannah (through a number of letters she wrote to a cousin during the Civil War).  Meissner’s writing is very descriptive, allowing the reader to see and feel the atmosphere the characters are in.  The plot, though, is slow-moving and is sometimes rather dark.  Although there is some light and healing at the end, I’m not entirely sure I ever found the whole story.

I received this book free from WaterBrook Multnomah Publishing Group for an honest review.