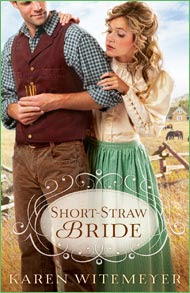 Karen Witemeyer's Short-Straw Bride is a fun read set in Texas in the late 19th century.

Ten-year-old Meredith Hayes made the "mistake" of trespassing onto Archer land -- something that few people are brave enough to try.  Her one brief encounter with Travis Archer made such an impression that she spent much of her childhood and teen years dreaming of him as a dashing hero.

Fast forward twelve years and Meredith finds herself facing the prospect of stepping onto Archer land again.  After overhearing a plot to do damage to the property fiercely protected by the four Archer brothers, Meredith feels obligated to warn them of the danger.  A series of unfortunate circumstances forces Meredith into a marriage of obligation to one of the Archer brothers.  When she discovers that Travis is the one she's matched up with -- all because he drew the short straw -- she worries about the prospects of ever experiencing real love with the man of her dreams.

I would recommend Short-Straw Bride to anyone who enjoys an easy-to-read story involving romance, suspense, adventure, and faith.  Many of the characters some alive on the page and are people who would be fun to meet.  You can't help but cheer them on as they face the dangers posed by those with less than noble motives to their actions.

(This book was provided free of charge from Bethany House in exchange for my honest review.)
Posted by Southern Gal at 6:28 AM