A Child's Introduction to Amish Life -- Life with Lily 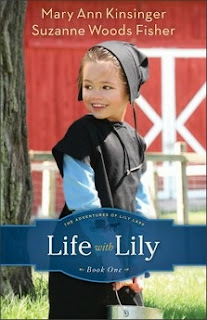 How do you grow the next generation of Amish fiction readers?  One way is to introduce them at an early age to The Adventures of Lily Lapp.  The series is co-authored by a bestselling writer of Amish fiction (Suzanne Woods Fisher) and a former Amish (Mary Ann Kinsinger) whose memories form the basis for the stories.

Life with Lily is a charming story about a lovely little Amish girl.  Lily Lapp is six years old when the story begins, and she seems to find adventure and important lessons in the day-to-day routines of life.

This book, directed toward children ages 8-12, is also a fun read for adult fans of Amish stories.  It could easily be treated as a collection of short stories with short chapters that make easy reading for young readers and would likely hold the attention of pre-readers as well.  Englisch children will find Lily to be much like them in many ways while also learning about differences in her Amish world.  Watching Lily grow through the four novels in this series will be a delightful adventure, one to be shared by readers of all ages.

Young readers can have additional fun with Lily by visiting her website:  www.AdventuresofLilyLapp.com

(This book was provided free from Revell Publishers for my honest review.)


Bestselling author Suzanne Woods Fisher and debut author Mary Ann Kinsinger introduce readers to 6-year-old Lily Lapp in Life with Lily, the first book in The Adventures of Lily Lapp series. It combines the real-life stories of growing up Amish from Kinsinger’s childhood with Fisher’s critically-acclaimed writing. The first of four novels that chronicle the gentle way of the Amish through the eyes of a young girl, Life with Lily gives children ages 8-12 a fascinating glimpse into the life of the Amish.

Kinsinger was raised in a happy Old Order Amish home in western Pennsylvania. After she and her husband made the difficult decision to leave the Amish, she started the blog A Joyful Chaos as a way to capture her childhood memories. “I was told almost every day by readers that they would love if I published my memories in a book,” says Kinsinger. “I love how dreams can come true bigger and better than I could have imagined.” After becoming friends with Fisher through her blog, the pair jumped at the opportunity to collaborate on a children’s series.

“The Lily books are more than just another good children’s series,” says Fisher. “They’re a little slice of America, a peek into the world of a happy Amish family, fun and foibles. I have a sneaking hunch that children of all ages will quickly grow attached to Lily.”

Suzanne Woods Fisher is the bestselling author of The Choice, The Waiting, The Search, The Keeper and The Haven, as well as nonfiction books about the Amish, including Amish Peace. Her interest in the Anabaptist cultures can be directly traced to her grandfather, W. D. Benedict, who was raised in the Old Order German Baptist Brethren Church in Franklin County, Pennsylvania. Suzanne is a Christy Award nominee and is the host of an internet radio show called Amish Wisdom. She lives in California. Visit her website www.suzannewoodsfisher.com and follow her on twitter @suzannewfisher.

Mary Ann Kinsinger was raised Old Order Amish in Somerset County, Pennsylvania. She met and married her husband, whom she knew from school days and started a family. After they chose to leave the Amish church, Mary Ann began a blog, A Joyful Chaos, as a way to capture her warm memories of her childhood for her own children. From the start, this blog found a ready audience and even captured the attention of key media players, such as the influential blog AmishAmerica and the New York Times. She lives in Pennsylvania.
Posted by Southern Gal at 5:37 PM