Back Home to Hickory Hollow -- The Bridesmaid 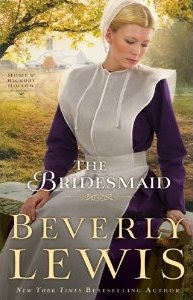 Twenty-seven-year-old Joanna Kurtz has made several trips to the altar, but never as a bride. The single young Amishwoman is a closet writer with a longing to be published something practically unheard of in her Lancaster County community. Yet Joanna's stories aren't her only secret. She also has a beau who is courting her from afar, unbeknownst even to her sister, Cora, who, though younger, seems to have suitors to spare.

Eben Troyer is a responsible young Amishman who hopes to make Joanna Kurtz his bride--if he can ever leave his parents' farm in Shipshewana, Indiana. Yet with his only brother off in the English world, intent on a military career, Eben's hopes for building a life with his dear Joanna are dimming, and patience is wearing thin. Will Joanna ever be more than a bridesmaid?

Beverly Lewis has been called the queen of Amish fiction and credited with giving birth to the genre.  The Bridesmaid is a perfect example of how deserving she is of that title!

In the late 1990s I read my first Amish novel by Beverly; I think it was The Shunning.  After this one book, also set in Hickory Hollow, I was hooked and wanted to go to Lancaster County, Pennsylvania.  Over a decade later -- in 2010 -- my husband and I finally got to make that trip, and now the stories come even more alive as I read them.

During those years, I have read a lot of great Amish books by a variety of authors.  I couldn't begin to choose my favorite book or favorite author -- but Beverly Lewis still ranks with the best, and The Bridesmaid is an example of her high quality writing.  I felt like I was in the familiar company of good friends as I followed Joanna's and Eben's story.  The many uncertainties throughout the book kept me interested and wanting to keep reading to see how things would work out.

I didn't read The Fiddler, the first book in this series, before reading The Bridesmaid.  Although I was able to immediately engage in the story without the benefit of book one, I definitely plan to go back and see what I missed.

I would highly recommend The Bridesmaid to anyone who enjoys great Amish fiction.

This book was provided free of charge by Bethany House in exchange for my honest review.

Beverly's first venture into adult fiction is the best-selling trilogy, The Heritage of Lancaster County, including The Shunning, a suspenseful saga of Katie Lapp, a young Amish woman drawn to the modern world by secrets from her past. The book is loosely based on the author's maternal grandmother, Ada Ranck Buchwalter, who left her Old Order Mennonite upbringing to marry a Bible College student. One Amish-country newspaper claimed Beverly's work to be "a primer on Lancaster County folklore" and offers "an insider's view of Amish life."

A member of the National League of American Pen Women, as well as a Distinguished Alumnus of Evangel University, Lewis has written over 80 books for children, youth, and adults, many of them award-winning. She and her husband, David, make their home in Colorado, where they enjoy hiking, biking, and spending time with their family. They are also avid musicians and fiction "book worms."