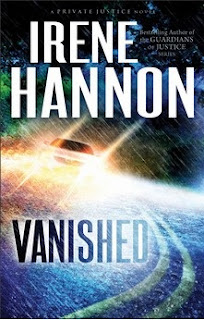 In her newest romantic-suspense novel, critically-acclaimed author Irene Hannon asks herself what would happen if the victim of a deadly car crash on a secluded country road simply disappeared? Vanished is the gripping first novel in Hannon’s Private Justice series. It opens with a shadowy figure caught in the beam of reporter Moira Harrison’s headlights – followed by a solid thump before she loses control and crashes into a tree. But when Moira regains consciousness, the victim is nowhere to be seen.

The police say the disappearance never happened, but Moira can’t forget the look of sheer terror she saw on the person’s face in the instant it was caught in the glare of her headlights. Now her only hope of discovering the truth is a former police detective turned private eye—and her own investigate skills.

As often happens for Hannon, the genesis of this story came out of the blue, triggered by a simple incident.

“I was driving home from church one rainy night and my headlights fell on a bicyclist on the edge of the narrow road. I swerved to avoid him, thinking what a risk he was taking. Then the wheels in my brain started turning and I began what-iffing. What if a woman was driving alone on a country road and suddenly caught a desperate figure in her headlights? What if she swerved, but hit the figure? What if a stranger appeared out of the darkness to offer assistance before she lost consciousness? What if she woke up and both the stranger and the victim had disappeared? My five-second encounter on that rainy night was the impetus not only for this book, but for my whole Private Justice series, which focuses on situations that have fallen through the cracks of official law enforcement or been dismissed by the police.”

Irene Hannon has done it again with the first book of her Private Justice series!  Just like her previous two series, Vanished has all the elements that make a winner -- gripping suspense, intriguing romance, exciting characters, and practical faith.  She hooked me on page one and never let me go.

As the saying goes, "the plot thickens," page by page throughout the story.  Secrets are revealed on an as-needed basis, at just the right pace to keep you guessing and checking your theories.  As always, Irene's in-depth research into the various aspects of her plot and characters keeps things "real" and lends credibility to her story.  The characters' difficult discussions about justice and morality added a very thought-provoking touch to the book.

And I have to admit it's sort of fun to see my own town of Potosi (a small, relatively unknown Missouri town) show up occasionally in her books -- even if for less than ideal reasons!

Dee Henderson and Terri Blackstock set the bar for me several years ago in the Christian suspense genre.  Dee Henderson has been quoted as saying about Irene Hannon, "I found someone who writes romantic suspense better than I do."  I definitely agree that Irene belongs there at the top with those other favorite authors.

I would recommend finding a time when you can read uninterrupted for a few hours, if at all possible, and get started on Vanished.  I can't imagine having to put down this book once you get started, as I read the entire thing in one afternoon/night.

Available January 2013 at your favorite bookseller from Revell, a division of Baker Publishing Group.  Book 2 in the series is due out in fall of 2013, followed by book 3 next year.  I'll be waiting impatiently to learn more about the characters introduced in Vanished.

Thanks to Revell for providing this book free of charge in exchange for my honest review.

Irene Hannon is the author of more than 40 novels, including the bestselling Heroes of Quantico and Guardians of Justice series. Her books have been honored with two coveted RITA awards from Romance Writers of America, a Carol Award, a HOLT Medallion, a National Readers’ Choice Award, a Daphne du Maurier Award, a Retailers Choice Award and two Reviewers' Choice Awards from RT Book Reviews magazine. She lives in Missouri.
For more information about her and her books, visit her web site at www.irenehannon.com and follow her on Twitter at @IreneHannon.
Posted by Southern Gal at 12:19 AM