How does she do it . . . over and over again???  Terri Blackstock grabs you on page one, pulls you right into the middle of a story, and doesn't let you go -- even after the last page is finished! 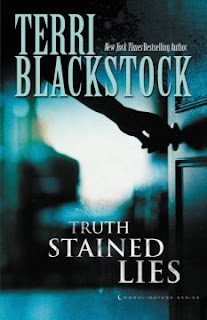 Truth Stained Lies may just be her very best book yet!  The characters are unforgettable, real people with gritty problems and various levels of doubt or confidence about their faith.  The story is filled with her characteristic suspense and intriguing relationships.  In addition to the main emphasis on solving the crimes, there are several other sub-plots between characters and within the characters as they deal with their individual struggles.

The bad thing about this story -- the next book in the Moonlighters Series won't be out until early next year.  That's a long wait to see where the story takes us next!

I highly recommend this "up-all-night" nail-biter that had tears streaming down my face at the conclusion.  As always, Terri's writing is uplifting and God-honoring.  Even her "Note from the Author" at the end of the book is thought-provoking and inspiring.

Thanks to Book Sneeze for providing a copy of this book in exchange for my honest review.

Cathy Cramer is a former lawyer and investigative blogger who writes commentary on local homicides. When she finds a threatening note warning her that she’s about to experience the same kind of judgment and speculation that she dishes out in her blog, Cathy writes it off as mischief … until her brother is caught in the middle of a murder investigation---the victim is his ex-wife. As her brother is tried and convicted in the media, and bloggers and commentators like her have a field day, Cathy wonders if she should have taken the threat more seriously.

Cathy and her two sisters, Holly and Juliet, moonlight as part-time private investigators, working to solve their brother’s ex-wife’s murder. Juliet, a stay-at-home mom of two boys, and Holly, a scattered ne’er-do-well who drives a taxi, put aside their fear and lack of confidence to learn the art of investigation.

But will it be too late to save their brother from a murder conviction, or his five-year-old son who’s the killer’s next target? 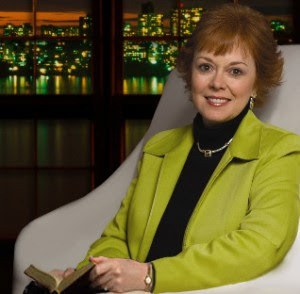 Terri Blackstock is a New York Times best-seller, with over six million copies sold worldwide. She has had over twenty-five years of success as a novelist. Terri spent the first twelve years of her life traveling in an Air Force family. She lived in nine states and attended the first four years of school in The Netherlands. Because she was a perpetual “new kid,” her imagination became her closest friend. That, she believes, was the biggest factor in her becoming a novelist. She sold her first novel at the age of twenty-five, and has had a successful career ever since.

Her latest series is the acclaimed, award-winning Intervention Series (Intervention, Vicious Cycle, Downfall). Other reader favorites include her books Predator and Double Minds, as well as the Restoration Series, the Newpointe 911 Series, the Cape Refuge Series, and the SunCoast Chronicles series.

Watch this interview to learn more about Terri and her writing.

In 1994 Terri was writing romance novels under two pseudonyms for publishers such as HarperCollins,
Harlequin, Dell and Silhouette, when a spiritual awakening prompted her to switch gears. At the time, she was reading more suspense than romance, and felt drawn to write thrillers about ordinary people in grave danger. Her newly awakened faith wove its way into the tapestry of her suspense novels, offering hope instead of despair. Her goal is to entertain with page-turning plots, while challenging her readers to think and grow. She hopes to remind them that they’re not alone, and that their trials have a purpose.

Terri has appeared on national television programs such as “The 700 Club” and “Home Life,” and has been a guest on numerous radio programs across the country. The story of her personal journey appears in books such as Touched By the Savior by Mike Yorkey, True Stories of Answered Prayer by Mike Nappa, Faces of Faith by John Hanna, and I Saw Him In Your Eyes by Ace Collins.

Learn more about Terri and her other books at her website.
Posted by Southern Gal at 4:20 PM