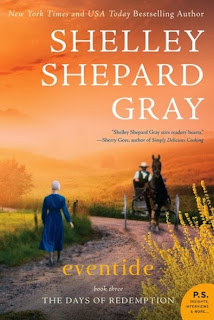 Eventide is an enjoyable conclusion to Shelley Shepard Gray's The Days of Redemption series.

Elsie is the main character in this installment of the Keim family's story, and her strength of character shines through.  It becomes clear early in the story that she is much stronger and more determined than her family members are willing to admit.  Although her sight is failing, Elsie learns to better see how to really live in the present and prepare her heart for the future. Both Elsie's parents and grandparents come face to face with results of their own past choices and find some surprises along the way.

Shelley's characters are realistic and face true-to-life challenges.  Throughout the series, she shares enough about each person's story to encourage her readers to care about the characters and the choices they make.

I recommend this entire series to fans of good Amish fiction.

Thanks to Litfuse Publicity Group for providing me a copy of Eventide in exchange for my honest review.

See what other reviewers think about Eventide here.

A young Amish woman harbors a difficult secret. Does she dare share the truth with the man she hopes to marry?

Elsie Keim doesn't want to be left behind. Her twin sister, Viola, and her older brother, Roman, have both found love and are building lives of their own. But Elsie? She's still stuck at home, being treated like a child. No one seems to consider her a capable woman-all they see are the thick lenses of her glasses, constant reminders that Elsie suffers from keratoconus and is slowly going blind.

Elsie knows there's much more to her than her disease. That's why when a new neighbor, Landon Troyer, shows some interest in her, she doesn't want anything to scare him away . . . even if it means keeping her condition a secret.

Landon is ready to start a new life and feels like Elsie may just be the right woman to start it with. But when Roman steps in and shares the truth about Elsie's illness, Landon is floored. His job is demanding and takes him away from home, sometimes for days at a time. How could he keep up with his responsibilities and take care of Elsie? 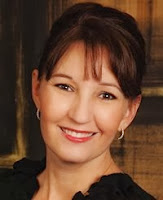 Shelley Shepard Gray is the New York Times and USA Today bestselling author of the "Sisters of the Heart", "Seasons of Sugarcreek", "Secrets of Crittenden County", and Families of Honor series. She lives in southern Ohio, where she writes full-time, bakes too much, and can often be found walking her dachshunds on her town's bike trail.

Shelley Shepard Gray is celebrating the release of the final book in The Days of Redemption series, Eventide, by giving away FIVE sets of the series.

Five winners will receive:
Enter today by clicking one of the icons below. But hurry, the giveaway ends on September 21st. All winners will be announced September 23rd at Shelley's blog.

Don't miss a moment of the fun; enter today and be sure to visit Shelley's blog on the 23rd to see if you won one of the book sets!