And yet another Alaskan adventure (with author Q&A) -- Silenced 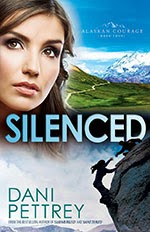 Silenced is the fantastic fourth installment in Dani Pettrey's Alaskan Courage series.  As in each of the previous books, this story includes  an exciting cast of characters but focuses particularly on one of the McKenna siblings  This time the spotlight is on Kayden.

Having read to this point in the Alaskan Courage series, the McKennas and other characters seem like old friends.  Dani writes with such clarity and detail that all the people come alive off the pages.  And the adventures they take part in keep a realistic and exciting level of suspense working throughout each book.  Silenced is certainly no exception.

Dani will finish the series with Reef's story in Sabatoged, coming in the spring of 2015.  I can't wait to read that one as well!

Thanks to Bethany House for providing a copy of Silenced in exchange for my honest review.

A relaxing day of rock climbing takes a disturbing turn when Kayden McKenna’s route leads her to a face-to-face encounter with a dead climber. Is it a terrible accident or something sinister? When the case is handed to the overburdened sheriff, he turns to Jake Westin. With Jake’s past now revealed, he’s ready to use his talent for investigation again-–but he could never prepare for where the case will take him.

Kayden and Jake soon realize that the death was no accident. And worse, it seems the killer is on to them. When strange things begin happening in Yancey, Jake is terrified that once again his world may put someone he loves in danger.

But the truth is far worse than either of them imagine.

You can read an excerpt from Silenced here.

Thanks to Dani Pettrey and Amanda Dykes of PulsePoint Design for allowing me to participate in a special blog tour for Silenced.  As a part of that tour, I had the opportunity to do a Q&A session with Dani.  Here is a chance for me to share with you what Dani shared with me.


1.  How did your writing career begin?

I have always loved daydreaming and making up stories. I dabbled with creative writing growing up, but set it aside. It wasn’t until after the birth of my youngest daughter and a bout with a serious illness, that I really felt God stirring me to start writing again. When I first began, I spent a lot of time simply reading novels, seeing how they worked, analyzing why I fell in love with certain characters and not others. I attended writing conferences, joined a writer’s group and devoted regular time to writing.

I was also blessed with an amazing mentor who really shepherded me in the craft and writing life. I wrote for a number of years, entered contests and applied the feedback I received. Several years ago, I attended the ACFW conference. I approached my editor after his Spotlight Session and he was gracious enough to ask to see the first three chapters. A few weeks later, I got a request for the full. A few weeks after that he told me they were going to present it for contract. The day I got ‘the call' was amazing. I had received my share of rejections, so getting the ‘go ahead’ on a story I loved so dearly was pure joy. Fast-forward four years and my fourth book just released this month.

2.  What was your inspiration for the setting of this Alaskan Courage series?

I wanted a setting that worked well for a wide range of adventures—mountains, sea, and everything in between. Alaska is an amazing state, full of nearly endless possibilities. I also love how rugged and untamed the Alaskan wilderness is. There is an inherent risk of danger if you aren’t properly prepared and that works really well with suspense.

3.  What kind of research did you do for this series?  Were you already familiar with Alaska, or did you start from scratch?  (By the way, your stories just increase my bucket list wish for an Alaskan cruise!)

I started from scratch. I spent a lot of time researching Alaska before I ever began writing. I read a lot of books (both fiction and non-fiction), local blogs and travel blogs, watched documentaries and movies filmed on location there, and spent a great deal of time looking at photographs. I tried to immerse myself in the gorgeous state. I can’t wait until I’m able to finally take a trip there. I, too, have a very long bucket wish list for Alaska.

4.  Did you begin the series with the intent of writing the stories of each of the McKenna siblings, or did that develop as the series progressed?

I did start with the hope of writing the entire series—a book for each sibling. When I initially sold the series, it was for the first three books. After seeing how well readers responded to the McKenna family, we were able to increase the series to my original ideal of five books. I feel very blessed and am extremely grateful to my super supportive readers for the opportunity to tell each McKenna sibling’s story.

5.  I have read from some authors that their characters evolve and change from where they (the authors) first imagined, that they seem to take on a life of their own and begin to almost write their own stories.  Does that happen to you, or do you pretty much know where you're going from the beginning?

I generally have a rough idea of my character (age, occupation, etc.) and a story premise (what if…) and then I sit down and start writing. I love the freedom of seeing the characters come to life and learning about them as the story flows. For example, Piper McKenna’s book was originally supposed to be the last book (book 5) but she and Landon really came to life in Submerged as secondary characters so I knew the next book had to be theirs.

6.  You do an awesome job of incorporating Christian values and messages into your stories.  Is there a particular goal or purpose you feel as you put these words into the hands of your readers?

Thank you so much. I don’t view it so much as a goal. I like to view the faith element as a natural part of my stories. Just as my love of adventure permeates the stories I write, so does my faith. My relationship with Jesus is part of every facet of my life; it’s only natural to be part of the stories I tell.

7.  What's next?  Do you already have something else in the works for after you tell Reef's story?

Reef’s story will be out in February. It was a really strange experience finishing up the first draft of his story, knowing it would be the last McKenna story I’d be telling—at least for a while (never say never).

At the same time, it’s been five years and I’m excited to move on to a new project and group of characters. I will be working on a new four book series, with the debut title in that series releasing in the Fall of 2015.

Dani Pettrey is a wife, home-schooling mom, and the acclaimed author of the romantic suspense series Alaskan Courage, which includes her bestselling novels Submerged, Shattered, Stranded, and her latest release, Silenced. She feels blessed to write inspirational romantic suspense because it incorporates so many things she loves–the thrill of adventure, nail biting suspense, the deepening of her characters’ faith, and plenty of romance. She and her husband reside in Maryland, where they enjoy time with their daughters, son-in-law, and super adorable grandson.
Posted by Southern Gal at 3:53 PM