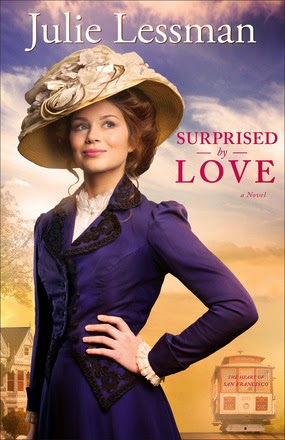 Julie Lessman's Surprised by Love is the third fun installment in her Heart of San Francisco series.  I haven't had the chance to go back and read the first book in the series but have enjoyed getting to know the McClare family and friends in books two and three.

Through these stories, set in San Francisco in the very early years of the 20th century, Julie allows us glimpses into both the highest and lowest of society of that time.  Megan, the former wallflower of the well-to-do McClare family, has returned from a year in Paris, with a confidence and determination leaving her barely recognizable even to those closest to her.  Her new tenacity is tested in heart-wrenching ways in her career aspirations . . . and in love.  At the same time, her mother continues to struggle with relationships complicated by trust issues.  The characters and the plot are well developed in ways that keep the reader's interest level high, leaving important questions unanswered until near the end of the story.  Faith plays an important role in several of the characters' lives, some starting with strong faith and others learning as they work through their struggles.

I would recommend Surprised by Love to fans of good historical fiction.  The book works fine as a stand alone, but I would suggest reading the other books in the series first to get the whole story.

Thanks to Revell Publishing for providing a copy of this book in exchange for my honest review.

She can turn the head of the man who spurned her--but can she turn his heart?

When Megan McClare left San Francisco to study in Paris, no one would accuse her of being poised and pretty. But on the other side of the Atlantic, this wallflower blossomed into a beauty with big dreams. When she returns to California and accepts an internship at the district attorney's office, she's thrilled that her life is taking shape. But the exciting opportunity quickly loses its glow when she discovers she'll be working alongside Devin Caldwell, who mercilessly mocked her at school--and with whom she was hopelessly enamored.

Bram Hughes is the best friend to whom Megan has always turned for support and advice. But when she seeks his counsel about working with Devin Caldwell, Bram's vision is clouded by his sudden unwelcome attraction to a girl he had always thought of as a little sister. He advises forgiveness, but can he forgive himself for pushing the woman he loves into the arms of another man?

Author Julie Lessman draws a romantic triangle that will touch your heart in this glittering Gilded Age tale of transforming love.

Julie Lessman is an award-winning author of The Daughters of Boston series and the Winds of Change series The recipient of 14 Romance Writers of America awards, as well as many other accolades, Lessman was chosen as the #1 Romance Fiction Author of the Year in the Family Fiction magazine 2011 and 2012 Readers' Choice Awards. She resides in Missouri with her family. You can contact Julie through her website at www.julielessman.com.