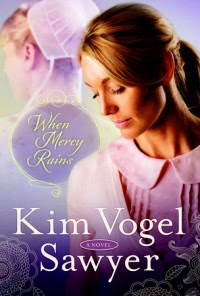 The first books I ever read by Kim Vogel Sawyer were the three volumes in her Mennonite series, The Sommerfeld Trilogy.  She won me over with those stories, and I have grown to appreciate her work more and more as I've read her historical novels through the years.  I have a hard time picking favorites in almost any category, but Kim would definitely be on my short list of favorite authors!

When Mercy Rains begins another great trilogy of stories in a Mennonite setting -- The Zimmerman Restoration Trilogy.
As that label suggests, restoration is an important theme running through this first book.  Secrets have led to deep hurts on the part of many of the characters, but the truth finally comes out, bringing with it mercy and healing.  From beginning to end, the characters are very real and draw you into their stories.  Some elements of the story are easy to predict as the book progresses, but Kim provides several twists and surprises which keep things very interesting.

Fans of stories about Plain life or great Christian fiction in general should enjoy When Mercy Rains.  The book has a nice ending, but there is still plenty of room for the story to continue.  I look forward to seeing where Kim takes us next in When Grace Sings, book #2 in the series, which should be available soon.

She left, heavily weighted with secrets. But God reveals all things, in His timing. And He redeems them.

Suzanne Zimmerman was only seventeen and pregnant when her shamed mother quietly sent her away from their Old Order Mennonite community in Kansas. With her old home, family, and first love firmly behind her, Suzanne moved to Indiana, became a nurse, and raised a daughter, Alexa, on her own.

Now, nearly twenty years later, an unexpected letter arrives from Kansas. Her brother asks her to bring her nursing abilities home and care for their ailing mother. His request requires that Suzanne face a family that may not have forgiven her and a strict faith community. It also means seeing Paul Aldrich, her first love.

Paul, widowed with an eight-year-old son, is relieved to see Suzanne again, giving him the chance to beg her forgiveness for his past indiscretion. But when he meets Alexa, his guilt flickers in the glare of Suzanne’s prolonged secret—one that changes everything.

Suzanne had let go of any expectation for forgiveness long ago. Does she dare hope in mercy–and how will her uncovered past affect the people she loves the most?

Kim Vogel Sawyer is a best-selling, award-winning author highly acclaimed for her gentle stories of hope. More than one million copies of her books are currently in print. She lives in central Kansas where she and her retired military husband, Don, enjoy spoiling their ten granddarlings.

Kim Vogel Sawyer is a best-selling author highly acclaimed for her gentle stories of hope. More than one million copies of her books are currently in print and have garnered awards including the ACFW Carol Award, the Inspirational Readers Choice Award, and the Gayle Wilson Award of Excellence. Kim lives in central Kansas, with husband Don and their four feline companions. She enjoys spending time with her three daughters and ten grandchildren. - See more at: http://waterbrookmultnomah.com/author-spotlight.php?authorid=162648#sthash.svA8lPGF.dpuf
Posted by Southern Gal at 9:02 PM