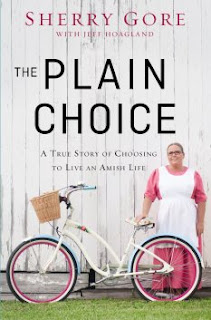 Before reading The Plain Choice, I had gotten to know quite a bit about Sherry Gore through social media and glimpses of her Plain life that she shared in her cookbooks.  Her faith and relentless spirit through difficulties shine through in any contact with her.  But I knew little of the detail of her life's choices until reading this fascinating telling of her story.

Sherry has successfully done what relatively few people have -- moving from life in the modern "English" world to becoming fully assimilated into an Amish life.  Her move was not motivated by some fascination or curiosity of a different lifestyle.  Rather, Sherry became convicted of the type of life she believed God intended for her to live and found that the
Amish church and community was the environment in which to life out those convictions.

As all followers of God's way for their lives find, making the right choice does not guarantee an easy life, free from problems.  What it did provide for Sherry, though, was a place of belonging and peace that comes from following God's direction.

Although most of us who read this story will not find ourselves making the same choices as Sherry's, by reading her story we can certainly be inspired to find our own place in life.

Anyone with an interest in things Amish -- as well as those who have no exposure to this way of life -- should enjoy this story and find it to be fascinating and motivational.

Thanks to BookLook Bloggers for providing a copy of The Plain Choice in exchange for my honest review.


Raised in a broken family and emotionally overlooked, Sherry Gore grew up without a solid foundation, a prisoner of her own poor choices, and at times without hope.  A series of terrible mistakes left her feeling wrecked and alone and a sudden tragedy threw Sherry into an emotional tailspin too powerful to escape.

Sherry hangs by a thread, unable to see how she can go on living, until it happens: on a morning of no particular significance, she walks into a church and BAM the truth of Jesus’ forgiving love shatters her world and cleaves her life in two:  She goes to bed stunned; she wakes up a Christian.

Unwilling to return to the darkness of her former life, Sherry attacks her faith head on.  Soon the life Sherry Gore remakes for herself and her children as she seeks to follow the teachings of the Bible features head coverings, simple dress, and a focus on Jesus Christ.  Only then does she realize, in a fit of excitement, that there are others like her.  They are called Amish and Mennonite, and she realizes she has found her people.

The plain choice that Sherry makes is not easy – and life still brings unexpected pain and heartache - but it changes everything for her, as she becomes one of the few people on earth to have successfully joined the Amish from the outside.

She has found her place. And her story proves that one can return from the darkest depths to the purest light with the power of God.

Sherry Gore is the the author of two cookbooks, "Simply Delicious Amish Cooking" and "Me, Myself and Pie" and co-author of the novel "Made with Love.” She is also a weekly scribe for the national edition of the Amish newspaper, The Budget, established in 1890. The National Geographic Channel featured Sherry prominently their documentary series, Amish: Out of Order. Sherry's culinary adventures have been seen on NBC Daytime, the Today Show, Mr. Food Test Kitchen and more. Sherry is a year-round resident of beautiful, sun-kissed Sarasota, Florida, the vacation paradise of the Plain People. She has three children and is a member of a Beachy Amish Mennonite church. When not spending time with her family, writing, or eating, Sherry is a cooking show host, and an official pie contest judge.
Posted by Southern Gal at 9:33 PM