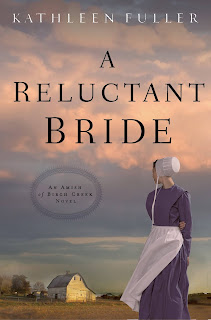 A Reluctant Bride is Kathleen Fuller's best yet.  This Amish story has complex characters who are thrown together in unexpected ways that provide an intriguing story.

Sadie and Aden both harbor deep hurts and secrets that make their individual lives difficult enough on their own.  But when they are suddenly thrown together out of necessity, they have to make choices about how much to share in order to begin healing.

Kathleen did an awesome job of crafting these and other characters in ways that provide a very engaging story.  Some of the turns in the plot were expected, but others caught me off-guard, one element of great stories.  She brought in several tragic and difficult topics and allowed her characters to deal with them in emotion-provoking ways.  I alternated between cheering the characters on and crying with them as they struggled with their hurts and fears.

Fans of great Amish fiction should thoroughly enjoy A Reluctant Bride.  Thanks to Kathleen for providing a copy of this book in exchange for my honest review.


She never wanted to marry. He hopes to make amends for past wrongs. Can love find a way to heal both of their hearts?

Sadie Schrock swore she would never marry. All of her other Amish friends could court and marry—she was content to manage the family business and eventually take it over when her parents are ready to retire. But all of that changes when a reckless driver kills both of her parents and seriously injures her younger sister. With mounting hospital bills adding to the pile of debt her parents left behind, Sadie is left with no choice: she must marry. And not just any man—the man who saw her at her weakest and walked away.

Aden knows what his brother did to Sadie years ago was inexcusable. And every day since that incident, Aden has lived with the guilt for not intervening sooner. When he is faced with the chance to protect Sadie once again, he can’t let her down—even if it means living with the scorn of the woman he loves for the rest of his life.

Working alongside Aden at the store, Sadie realizes he isn’t the same boy who once betrayed her. Just when Sadie starts to let her guard down and perhaps develop feelings for her new husband, dangerous secrets are revealed. Now everything Sadie has worked so hard to protect is threatened, and she must find a way to save her family—and herself.

Kathleen Fuller is the author of several bestselling novels, including A Man of His Wordand Treasuring Emma, as well as a middle-grade Amish series, the Mysteries of Middlefield. Visit her online at www.kathleenfuller.com, Twitter: @TheKatJam, and Facebook: Kathleen Fuller.
Posted by Southern Gal at 3:25 PM