Music for your heart -- A Note Yet Unsung 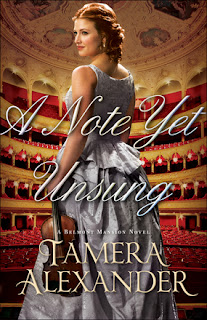 Opening the cover of Tamera Alexander's A Note Yet Unsung is an experience that will bring music to your heart.  You step immediately into 19th century Nashville, Tennessee, and are swept into the lives of Rebekah Carrington and Tate Whitcomb and the parts they play in the fledgling Nashville Philharmonic.

From the opulence of Adelicia Acklen Cheatham's Belmont Mansion to the sparseness of Chicory Hollow this story is a journey filled with tears, laughter, and almost every emotion in between -- with love and music as the threads that tie everything together.  A Note Yet Unsung is one of those books where you can get so lost in the story that you aren't sure whether you want to see how it all comes together or you want it to never end.  The hardest part of reading the book was when I looked at the clock at 1:30 a.m. and realized I had to put it away to get a few hours of sleep before finishing the story.

Tamera Alexander has an incredible way with words and uses her awesome skill of mixing facts and fiction to craft breathtaking stories filled with characters so alive that you expect them to speak directly to you.  Although they are stand-alone novels, all three of her Belmont Mansion novels have some commonalities that make the entire series worth reading in order.  I highly recommend them to any fan of great inspirational historical fiction.

Thanks to Bethany House Publishers for providing a copy of this book.  I am delighted to share my personal thoughts for this review.

A master violinist trained in Vienna, Rebekah Carrington manages to wheedle her way into an audition with the maestro at the newly formed Nashville Philharmonic. But women are "far too fragile and frail" for the rigors of an orchestra, and Rebekah's hopes are swiftly dashed because the conductor--determined to leave his mark on the world of classical music--bows to public opinion. To make matters worse, Adelicia Acklen Cheatham, mistress of Belmont Mansion and Rebekah's new employer, agrees with him.

Nationally acclaimed conductor Nathaniel Tate Whitcomb is Nashville's new orchestra leader. And despite a reluctant muse--and a strange buzzing and recurring pain in his head--he must finish composing his symphony before the grand opening of the city's new opera hall. But far more pressing, he must finish it for the one who first inspired his love of music--his father, who is dying. As Tate's ailment worsens, he believes Rebekah can help him finish his symphony. But how do you win back a woman's trust when you've robbed her of her dream?

As music moves us to tears yet makes our hearts soar, A Note Yet Unsung captures the splendor of classical music at a time when women's hard-won strides in cultural issues changed not only world history--but the hearts of men.

Tamera Alexander is a bestselling novelist whose works have been awarded or nominated for numerous honors, including the Christy Award, the RITA Award, and the Carol Award. After seventeen years in Colorado, Tamera and her husband have returned to their native South and live in Tennessee, where they enjoy spending time with their two grown children.