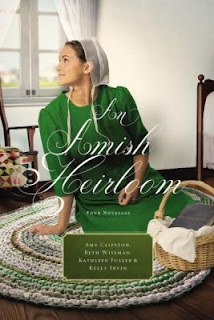 An Amish Heirloom is a collection of four novellas from some of the top names in Amish fiction. These collections are fun to read for a number of reasons. They provide a nice break from the longer novels and series I enjoy reading. The stories sometimes connect to characters in other series from the authors. And they sometimes provide a chance to try out authors whose books you have not read before.

All four stories in this collection were nice Amish romances, tied together with the idea of some heirloom important to the main characters. Those heirlooms include rocking chairs, old love letters, a Bible, and an old baby quilt.

Although I enjoyed all the stories, Beth Wiseman's The Cedar Chest and Kathleen Fuller's The Treasured Book were my favorites. Beth's dual timeline story was very intriguing, and the development of a sweet love story and its impact on present-day characters was touching. Kathleen's story of almost-missed love was very engaging, and it was fun to visit characters I "knew" from her Amish Letters series. I believe Amy Clipston's story was related to one of her series, but I have not read those particular books.

I would definitely recommend this enjoyable collection of stories to Amish fiction fans.


A Legacy of Love by Amy Clipston
Local volunteer fire fighter Leon King agrees to repair his ex-girlfriend Susie Bontrager’s grandparents’ antique rocking chairs for her future home with her fiance and is forced to acknowledge that his feelings for her have not quite gone away. As Susie spends time with Leon, she begins to recognize she is marrying the wrong man for all the wrong reasons.

The Cedar Chest by Beth Wiseman
Decades after inheriting her great grandmother’s cedar chest, Emma Fisher decides to pry it open only to discover a beautiful love story in the form of letters between her great grandparents. But as Emma immerses herself in their story, family secrets are revealed, and she must decide whether to share them to preserve family history or honor her great grandparents’ decision to leave them hidden.

The Treasured Book by Kathleen Fuller
For the past two years, Shane Broyles has felt God leading him to join the Amish. He’s staying with his friends Noah and Ivy Schlabach in Birch Creek, OH, where he is reunited with Lucy Fisher, an old friend of Noah’s family. Shane and Lucy have never revealed their feelings for each other, but when they stumble upon an antique Bible at a flea market, they feel drawn to each other and to the mystery of the contents found within.

The Midwife’s Dream by Kelly Irvin
Iris Beachy serves as a midwife in her district where she longs for a family of her own. When her friend’s brother Mahon Kurtz seeks her help in delivering the baby of two young teenagers who have sought refuge in their town, they begin to see each other in a different light. Unprepared for parenthood, the young couple leave their baby girl behind in an antique crib quilt resembling the one destined for Iris when she becomes a mother. Mahon and Iris come together to take care of the baby as they try to find her parents, and they begin to see new possibilities for their future.

Amy Clipston is the award-winning and bestselling author of the Kauffman Amish Bakery, Hearts of Lancaster Grand Hotel, Amish Heirloom, and Amish Homestead series. Her novels have hit multiple bestseller lists including CBD, CBA, and ECPA. Amy holds a degree in communication from Virginia Wesleyan College and works full-time for the City of Charlotte, NC. Amy lives in North Carolina with her husband, two sons, and three spoiled rotten cats. Visit her online at AmyClipston.com, Facebook: AmyClipstonBooks, Twitter: @AmyClipston.
Beth Wiseman is the award-winning and bestselling author of the Daughters of the Promise, Land of Canaan, and Amish Secrets series, as well as novellas that have been included in many bestselling collections such as An Amish Year and An Amish Garden. Visit her online at BethWiseman.com, Facebook: AuthorBethWiseman, Twitter: @BethWiseman.
Kathleen Fuller is the author of several bestselling novels, including the Hearts of Middlefield novels, the Middlefield Family novels, the Amish of Birch Creek series, and the Amish Letters series as well as a middle-grade Amish series, the Mysteries of Middlefield. Visit her online at KathleenFuller.com, Twitter: @TheKatJam, Facebook: Kathleen Fuller.

Kelly Irvin is the author of the Every Amish Season and Amish of Bee County series. The Beekeeper's Son received a starred review from Publisher's Weekly, who called it “a delicately woven masterpiece.” A former newspaper reporter and retired public relations professional, Kelly lives in Texas with her husband, photographer Tim Irvin. They have two children, two grandchildren, and two cats. In her spare time, she likes to read books by her favorite authors. Visit her online at KellyIrvin.com, Facebook: Kelly.Irvin.Author, Twitter: @Kelly_S_Irvin.
Posted by Southern Gal at 8:33 PM