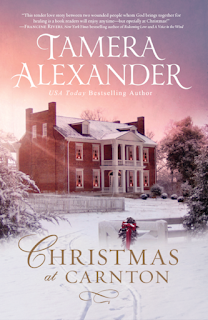 OK, I realize that it is not anywhere near Christmas, but that has no bearing on how much I enjoyed reading Tamera Alexander's Christmas at Carnton. And what makes it even better is knowing that this novella is an introduction to her three-part, full-length Carnton novels series.

Tamera has written several awesome historical fiction stories set in and near Nashville, Tennesse, around the time of the Civil War. She is a pro at taking historical facts and characters and fleshing out their stories with others from her own imagination. And that is exactly what she has done again in this introduction to her new series.

The characters -- Aletta and her son Andrew, Jake, the McGavock family, their cook Tempy, and others -- bring alive the history of the Carnton Plantation and offer a personal glimpse into what life might have been like for many affected by the difficulties of war. But through all the struggles comes a beautiful story of love and second chances.

Don't wait until Christmas to read Christmas at Carnton. It is a fantastic read for any time of year!


Amid war and the fading dream of the Confederacy, a wounded soldier and a destitute widow discover the true meaning of Christmas—and of sacrificial love.
Recently widowed, Aletta Prescott struggles to hold life together for herself and her six-year old son. With the bank threatening to evict, she discovers an advertisement for the Women's Relief Society auction and applies for a position—only to discover it's been filled. Then a chance meeting with a wounded soldier offers another opportunity—and friendship. But can Aletta trust this man?
Captain Jake Winston, a revered Confederate sharpshooter, suffered a head wound at the Battle of Chickamauga. When doctors deliver their diagnosis, Jake fears losing not only his greatest skill but his very identity. As he heals, Jake is ordered to assist with a local Women's Relief Society auction. He respectfully objects. Kowtowing to a bunch of "crinolines" isn't his idea of soldiering. But orders are orders, and he soon discovers this group of ladies—one, in particular—is far more than he bargained for.
Set against the backdrop and history of the Carnton Plantation in Franklin, Tennessee, Christmas at Carnton is a story of hope renewed and faith restored at Christmas.

Tamera Alexander is the USA Today bestselling author of numerous books, including A Lasting Impression, A Note Yet Unsung, To Whisper Her Name, and To Wager Her Heart.
Her richly drawn characters and thought-provoking plots have earned her devoted readers worldwide, as well as multiple industry awards.
These awards include the Christy Award for Excellence in Christian fiction, the RITA Award for Best Inspirational Romance, the Gayle Wilson Award of Excellence, Bookseller’s Best Award, and being listed among Publishers Weekly and Library Journal’s Top Inspirational Fiction, among others.
Posted by Southern Gal at 7:45 PM