Christmas in Hart County -- His Promise 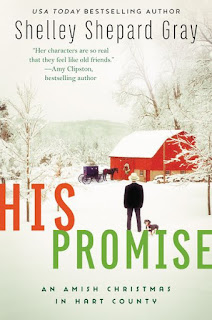 In His Promise, Shelley Shepard Gray adds a Christmas story to her Amish in Hart County series.

Like the others in this series, this story contains both suspense and romance, as well as a taste of Christmas and the antics of a challenging little dachshund. The characters include a wide range of folks, young and old, Amish and English, "good guys" and "bad guys."

The story is engaging and intriguing and a great read for fans of Amish fiction. It can be read as a part of the series or as a stand-alone.

Thanks to the author and her publisher for providing a copy of the book. I am happy to share my own thoughts in this review.

It’s set to be a white Christmas in Hart County, and Grace King is pet-sitting in a beautiful home with only a difficult dachshund for company. Just as she starts to miss the bustle of her large Amish family, Grace runs into a familiar face. Living right next door is John Michael Miller. He’s a fireman now, but five years ago, he had courted her older sister, then broke her heart. Seeing him again stirs Grace’s anger, but also reminds her of deeper feelings she’s done her best to deny.

The infatuation John Michael once saw in Grace’s eyes is long gone, though his complicated attraction to her remains. He had walked away all those years ago when he realized he was falling in love with the wrong sister. Now, as suspicious fires are set in their community, that’s not an option. Grace dismisses his warnings, and John Michael vows to keep an eye on her. But he can’t help wondering if he’s reconnected with Grace, only to risk losing her again.

Now all John Michael wants for Christmas is to keep Grace safe, in the hopes that they can one day have a future together.

Shelley Shepard Gray is a New York Times and USA Today bestselling author, a finalist for the American Christian Fiction Writers prestigious Carol Award, and a two-time HOLT Medallion winner. She lives in southern Ohio, where she writes full-time, bakes too much, and can often be found walking her dachshunds on her town’s bike trail. Please visit  www.shelleyshepardgray.com to learn more about Shelley and her books.
Posted by Southern Gal at 1:35 PM