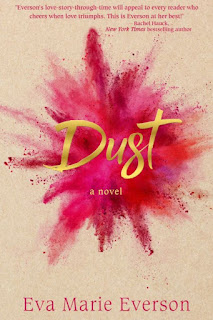 Dust is another good example of thought-provoking and rich southern story telling by Eva Marie Everson.

Allison (like many of the other characters in the story) is just an ordinary person, working through the easy and the hard of life the best she knows how. She deals with plenty of flaws and mistakes in her own life and those of others, but also draws from lots of determination and enduring love that pay off in the end. She seems to not always be too sure of her own value and contributions but eventually is able to look back and find satisfaction in the things that have really mattered in her life and legacy.

There is some warning that I feel I should give about this book. There is more emphasis on sexual encounters than is found in most Christian fiction that I read. The descriptions are not crude or terribly overt, but this topic does make several appearances in the story. And I found very little faith element making any kind of obvious showing. The story is touching and in general is well told, but it may be uncomfortable for some readers.

In 1977, when nineteen-year-old Allison Middleton receives a proposal of marriage from Westley Houser, she eagerly accepts, having no idea the secret Westley carries—a secret that will change Allison’s life forever. But Allison rises to the challenge of raising Westley’s toddling daughter as though she were her own.

Over the course of their lifetime together, Allison, Westley, and Michelle form the strong bond of family. As Allison struggles with infertility and finding her way during a time of great change for women, others—some she knows and others whom she never meets—brush and weave against the fabric of her life, leaving her with more questions than answers.

From teen bride to grandmother, Allison’s life chronicles the ups and downs of an ordinary woman’s life to examine the value of what we all leave behind.

Eva Marie is a CBA best-selling and multiple award-winning author and speaker, including a Christy finalist, a Silver Medallion winner, a Carol, several Maggie and Golden Scroll awards, and an Inspirational Retailers Choice Award. She is one of the original five Word Weavers members, which began in 1997. She served first as the original president (2000-2007) and is now president of Word Weavers International, Inc., which serves writers primarily as a national and international group of critique and educational chapters.

Eva Marie served as a mentor for the Jerry B. Jenkins Christian Writers Guild for several years and has taught at a number of writers conferences nationwide. During the 2010-2011 school year, Eva Marie served as an adjunct professor at Taylor University in Upland, Indiana. She describes it as one of the best times she ever had while working. Eva Marie also serves as director of Florida Christian Writers Conference and the contest director for the Blue Ridge Mountains Christian Writers Conference. She also enjoys working as a private writing coach and editor.

She is a graduate of Andersonville Theological Seminary and The Tzemach Institute. Her theological focus has always been the tie between the Testaments with a greater understanding of Christianity’s Jewish roots. Born and reared in Georgia, Eva Marie and her husband make their home in Central Florida where they are owned by one very spoiled cat and two hearts full of grandchildren.