Can a man write a good love story? -- The Discovery 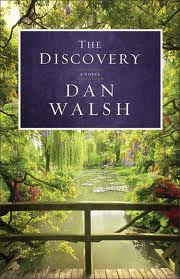 Recently, I read a thread of online posts questioning whether females would hesitate to read a book by a male if it included a love story.  Well, if you have any doubts about whether a man can write a good love story . . . check out Dan Walsh's The Discovery.

Michael Warner wants to be a writer but doesn't think he has a chance of living up to the reputation of his late grandfather.  When the will is read, Michael finds that he has inherited his grandfather's home and more money than he dreamed possible.  He and his wife Jenn now have the money to quit their jobs and do pretty much what they want with their lives.  For Michael, that includes the time to work on his dream of writing his first novel.

As Michael begins to settle into his new life, he finds that his grandfather has left a treasure specifically intended for him.  In the box his grandfather used for storing his old typewriter, Michael finds an unpublished manuscript.  The story, set in the time period of World War II, includes danger, intrigue . . . and a tale of a once-in-a-lifetime kind of love.  Before he finishes reading the book, Michael discovers why this is the most special of all his grandfather's writings.

This is the second book I've read by Dan Walsh, and I now have three others ordered.  His stories are rich and draw me in from the very beginning.  His characters have real depth to them, and it is easy to become involved in their lives.  One of the neat things about this book was getting a story within a story.  And it was interesting to learn some of facts about the German operations that were woven into the fictitious account.  I look forward to reading more of Walsh's work.

Dan Walsh is the award-winning author of The Unfinished Gift, The Homecoming, and The Deepest Waters. A member of American Christian Fiction Writers, Dan served as a pastor for 25 years. He lives with his family in the Daytona Beach area, where he's busy researching and writing his next novel.

Available April 2012 at your favorite bookseller from Revell, a division of Baker Publishing Group.

This book was provided free from Revell for my honest review.
Posted by Southern Gal at 11:17 PM