A Step Back in Time -- Glamorous Illusions 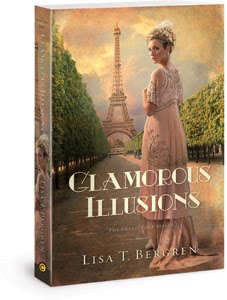 It was the summer of 1913, and Cora Kensington's life on the family farm has taken a dark turn. Not only are the crops failing, so is her father's health. Cora is carrying on, helping her mother run their Montana farm until a stranger comes to call, and everything changes. Cora then learns a secret that will radically change her future: she is the illegitimate daughter of a copper king who has come to claim her.

Cora is invited to take the "Grand Tour" of Europe, a journey intended to finish a person's education, to solidify an understanding of ancient culture and contemporary refinement. As she travels from England to France with half-siblings she's never known, Cora encounters the blessings of the Kensington family name, as well as the curses. But when an unbidden love begins to form, she realizes the journey is only beginning.

Faced with the challenge of accepting her father, new family, and the identity that comes with it, Cora also struggles to accept that she is also the daughter of the one true King-a Father who is the only One who can truly heal.

Christian historical fiction is a genre that I've become more involved in reading lately.  Lisa T. Bergren's Glamorous Illusions is the beginning of a series set during a time period I've not read much about -- the early 20th century.

In the summer of 1913, Cora returns home from a year of study in her preparation to become a teacher.  There is no way she could have guessed the turn her life is about to take when a long-kept secret is revealed.  Cora moves from trying to help her parents maintain the failing family farm to a life of privilege with the family of a copper king.  She reluctantly agrees to accompany newly found relatives on a Grand Tour of Europe.

As Cora travels through England, France, and Italy, experiencing things she never would have dreamed possible, she struggles to "find herself."  She is torn between loyalty to her parents and the life they've given her and the possibilities opening up in her new life.  How can she reconcile the two completely different worlds and maintain a sense of who she really is?  And what will she make of the opportunities for love that come along when she least expects them?

One of the things I really enjoy about historical fiction is the opportunity to learn facts of the time period, in the setting of an interesting story.  I had never heard of the practice of the Grand Tour, which was evidently a part of the education of privileged young people (especially young gentlemen) in past centuries.  The group was led by a tutor/chaperone, called a bear, who was responsible for exposing the young people to different cultures, teaching and protecting their clients as they traveled.

Lisa Bergen tells an interesting story that kept me involved in the twists and turns of the plot.  And the ending . . . well, she definitely left me hanging and wanting more.   I'll be anxiously awaiting the second book of this series.

This book was provided by Litfuse Publicity Group for my honest review.

You can view a book trailer for Glamorous Illusions here.

If you're interested in what other reviewers have to say about the book, check out this link.

Lisa Tawn Bergren is the best-selling, award-winning author of over 30 books, with more than 1.5 million copies sold. She just finished writing a Colorado historical trilogy (the first book, Breathe, Sing and Claim), and has begun a teen series called River of Time (Waterfall, book 1, comes out in February 2011).

Lisa's time is split between managing home base, writing (including a fair amount of travel writing), consulting and freelance editing (with a little speaking here and there). She's married to Tim, a liturgical sculptor, graphic designer and musician. They have three kids-Olivia (15), Emma (12) and Jack (7).  All five of the Bergrens make their home in Colorado Springs, Colorado.

For more information on Lisa and to view other books written, please visit her website: http://lisatawnbergren.com
Posted by Southern Gal at 5:18 PM