Another Visit to the Orchards -- The Winnowing Season


In The Winnowing Season 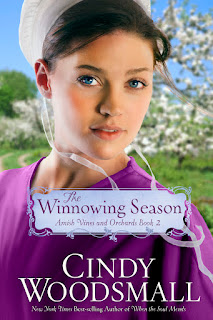 Cindy Woodsmall takes us on a return visit to the King and Byler families.  There we find them facing even more challenges in their efforts to relocate their homes and business and start a new community in Maine.  Conflict and confusion finds its way into the close-knit group of Amish both from within and from outsiders as well.  It seems that almost everyone has secrets that they aren't willing to share and which threaten to tear apart their work and relationships.

As always, Cindy shares a well-written story with engaging characters.  This series does not deliver a predictable Amish story.  There are twists and turns in the characters' experiences that add an unexpected level of intrigue to the plot.  And at the end of this second book there are still lots of loose ends to be tied up . . . so I'm anxiously awaiting For Every Season, the series' conclusion that is scheduled to come out in the fall of this year.

If you haven't already done so, you will want to read the beginning of the Rhoda's, Samuel's, and Jacob's story in A Season for Tending.  You can read my review of that one here.

This book was provided free of charge by WaterBrook Multnomah Publishing Group in exchange for my honest review.

The tornado that devastated Kings’ Orchard pushed Rhoda, Samuel, and Jacob to make a new start in Maine. Are they strong enough to withstand the challenges of establishing an Amish community—and brave enough to face the secrets that move with them?

On the eve of their departure to begin a new Old Order Amish community outside of Unity, Maine, Rhoda Byler is shocked to discover that choices made by her business partner and friend, Samuel King, have placed her and her unusual gifts directly into the path of her district’s bishop and preachers. She is furious with Samuel and is fearful that the Kings will be influenced by the way her leaders see her, and not what they know to be true—that Rhoda’s intuition is a gift from God.

Jacob King won’t be swayed by community speculation. He loves Rhoda, believes in her, and wants to build a future with her in Maine. But when the ghosts of his past come calling and require him to fulfill a great debt, can he shake their hold before it destroys what he has with Rhoda? Samuel has a secret of his own—one he’ll go to great lengths to keep hidden, even if it means alienating those closest to him. Throwing himself into rehabilitating the once-abandoned orchard, Samuel turns to a surprising new ally.

Book 2 of the Amish Vines and Orchards series asks: can the three faithfully follow God’s leading and build a new home and orchard in Maine? Or will this new beginning lead to more ruin and heartbreak?

Cindy Woodsmall is a New York Times  and CBA best-selling author of numerous works of fiction and one work of nonfiction whose connection with the Amish community has been featured widely in national media and throughout Christian news outlets.  She lives outside Atlanta with her family.