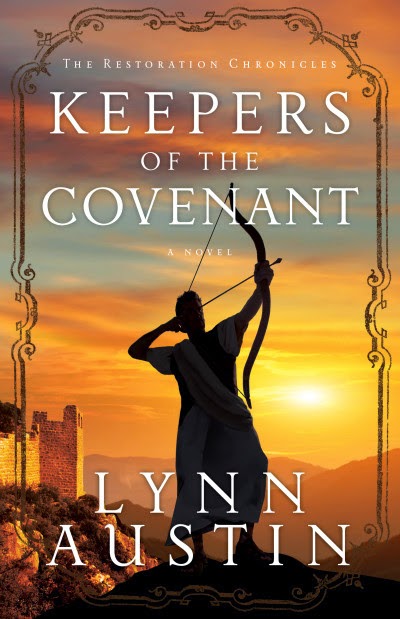 This is only the second book I've read by Lynn Austin, but I am sold on her great storytelling ability.  In Keepers of the Covenant, book two in her Restoration Chronicles  series, she has taken Old Testament historical events and real Bible characters and brought them to life with the addition of fictional characters and events.

It is evident Lynn has studied the Old Testament accounts and done her research on customs of the time period.  Then she has added well-thought-out characters and events as they could have happened to help her readers feel a sense of personal connection with the time and place of the stories.

It was eye opening to me to think of weaving together the stories of Esther and Ezra as Lynn did in this book, but it seems to be a very plausible fit to the Old Testament timeline.

See what other readers have to say about Keepers of the Covenant here.

The Old Testament Comes to Thrilling Life in the Latest from Lynn Austin
In one life-changing moment, the lives of the Jewish exiles in Babylon are thrown into confusion and despair when a decree arrives from the king's palace in Susa. It calls for the annihilation of every Jewish man, woman, and child throughout the empire on the thirteenth day of Adar, in less than one year. Ezra, a quiet Jewish scholar and teacher, is suddenly called upon to lead the community as they seek God for a reason for this catastrophe. When a second decree arrives, authorizing them to fight back, Ezra is thrust into the role of military leader as they defend themselves against their enemies.
When the battles come to an end, Ezra's brother Jude is dead and Ezra is required by the Law he so diligently studies to marry Jude's widow, Devorah, and provide an heir. Fatherhood changes Ezra, and he asks God to make a way for him and the other exiles to leave Babylon for good and return to Jerusalem. His prayers are answered and the exiles move to Judea to revitalize worship at the temple---but the fight to keep God's Law is never easy. As more and more of his community are tempted, a new battle emerges . . . this one for the survival of God's covenant and the souls of His chosen faithful.

Bestselling author Lynn Austin has sold more than one million copies of her books worldwide. She is an eight-time Christy Award winner for her historical novels, as well as a popular speaker at retreats and conventions. Lynn and her husband have raised three children and live near Chicago.