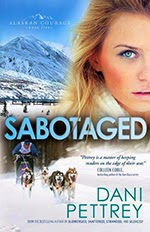 There is only one bad thing about Dani Pettrey's conclusion to her Alaskan Courage series -- and that is the fact that it's the conclusion!  Sabotaged is a great wrap-up to the series, but I hate for my time with the McKenna family to end.

As with each of the first four books, this story is filled with faith, suspense, and romance, while focusing primarily on one of the McKenna siblings.  This time the main characters are the youngest McKenna brother, Reef, and his search-and-rescue partner Kirra Jacobs.

While working as part of a team involved with the annual Iditarod race, Reef and Kirra are thrown into a complicated, life-and-death mystery.  Along the way, they both deal with issues of faith and healing as they learn more about each other and about their relationships with God.  As you can expect from Dani, the McKennas and their friends and partners face a multitude of dangers in the frozen wilds of Alaska.

Thanks to Dani and Bethany House for providing a copy of this book in exchange for my honest review.

Growing up, goody-two-shoes Kirra Jacobs and troublemaker Reef McKenna were always at odds. Now paired together on Yancey’s search-and-rescue canine unit, they begin to put aside old arguments as they come to see each other in a different light.

Then a call comes in from the Iditarod that will push them to their limits. Kirra’s uncle, a musher in the race, has disappeared. Kirra and Reef quickly track the man, but what they discover is harrowing. Frank’s daughter has been kidnapped. In order to save her, the man must use his knowledge as a mechanical engineer to do the kidnapper’s bidding or she will die.

Kirra and Reef, along with the entire McKenna family, are thrown into a race to stop a shadowy villain who is not only threatening a girl’s life, but appears willing to unleash one of the largest disasters Alaska has ever seen.

To help set the stage for Reef's and Kirra's adventure, here is a video which shows some of what is involved in an Iditarod race.

And find even more connection with the entire series by visiting Dani's Pinterest board.

Dani Pettrey is a wife, mom, grandma, and the acclaimed author of the Alaskan Courage romantic suspense series, which includes her bestselling novels Submerged, Shattered, Stranded, Silenced, and Sabotaged. Her books have been honored with the Daphne du Maurier award, two HOLT Medallions, a Christy Award nomination, two National Readers’ Choice Awards, the Gail Wilson Award of Excellence, and Christian Retailing’s Best Award, among others.

She feels blessed to write inspirational romantic suspense because it incorporates so many things she loves—the thrill of adventure, nail-biting suspense, the deepening of her characters’ faith, and plenty of romance. She and her husband reside in Maryland, where they enjoy time with their two daughters, a son-in-law, and a super adorable grandson
Posted by Southern Gal at 11:11 PM