A multi-layered beginning to a series -- Her Brother's Keeper 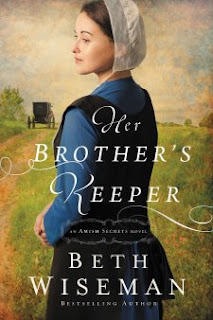 It has been a while since Beth Wiseman has started a new Amish series, but she certainly hasn't lost her touch.  Her new Amish Secrets series is off to a great start with Her Brother's Keeper.

This is a story with lots of layers and deals with some very difficult subjects -- like depression, mental illness and suicide.  Although those dark topics play prominent roles in the main plot, they are handled sensitively and balanced out with family, friendship, faith, and a healthy sprinkling of humor.

The characters that Beth so skillfully crafted definitely drive the story.  Charlotte/Mary and Hannah are two young ladies from very different backgrounds who are bound by a tragedy that neither of them understands and both want answers for.  Their relationship evolves through several stages throughout the story, as they each learn important lessons about themselves and about each other.

I highly recommend Her Brother's Keeper for fans of great Amish fiction.  For those who have not yet discovered the genre, this book -- with its mixture of Amish and Englisch worlds -- would be a great place to start.  I look forward to seeing what other secrets Beth Wiseman has to share in the rest of this series.

Thanks to Booklook Bloggers for providing a copy of this book in exchange for my honest review.


Charlotte came to Amish country to find answers. What she never expected to find was peace.

Charlotte Dolinsky is not above playing dress-up and telling a few lies to find out what happened to her only brother. In fact, that is exactly what she’s come to Lancaster County to do. Now, calling herself Mary and slipping on a kapp, Charlotte will lie her way into the confidence of anyone who knows why Ethan had to die. Unless she gets found out first.

But when Charlotte befriends a quiet Amish man named Isaac Miller, she begins to rethink her motives. And with a little help from a friend back home, Charlotte might find out that love comes packaged in ways she couldn’t have foreseen.

Isaac’s been caring for his cancer-stricken father and sympathizing with his frustrated mother for three difficult years. And that means he hasn’t been dating. He believes Hannah King is the woman for him, but Hannah is still grieving the loss of her fiancé, and Isaac has all he can handle on the farm. When Hannah’s family plays host to a woman named Mary, their new cousin shakes things up for all of them.

As Charlotte digs deeper into the mystery of Ethan’s death, she finds more than she’d bargained for in the community he once called home. But will she ever learn the truth? And what will the community—and her new family—do if they learn the truth about her?

Award-winning, bestselling author Beth Wiseman is best known for her Amish novels, including the Daughters of the Promise series and the Land of Canaan series. She has also written several successful contemporary novels, set primarily in her beloved Texas, including Need You Now and The House that Love Built. Both have received glowing reviews. Beth's The Promise is inspired by a true story.