Stay-up-late suspense -- Gone Without a Trace 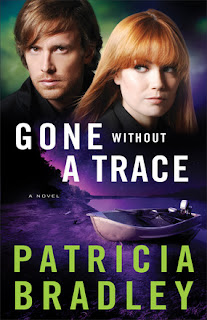 About a year and a half ago, I read Patricia Bradley's debut novel and was impressed with a fantastic romantic suspense story.  Gone Without a Trace continues that series in just as great a fashion!  With plenty of action from beginning to end, lots of twists and turns and mystery -- seasoned with a significant dose of romance and faith -- this was a story I stayed up way too late to finish!

The characters are very relatable, people easy to get involved with and care about.  The tough decisions and life-threatening dilemmas that Livy, Alex, and the others face keep the pace moving fast.  And the "bad guys" are hard to pinpoint until it's nearly over.

A great read for fans of good romantic suspense.

Thanks to Revell for providing a copy of this book in exchange for my honest review.

The past is repeating itself--and time is running out.
It's been more than two years since homicide detective Livy Reynolds's cousin disappeared from Logan Point. Unlike most people in her hometown, Livy has never believed that Robyn left voluntarily. When Dallas private investigator Alex Jennings contacts her concerning a senator's missing granddaughter who was last seen in Logan Point, Livy notices eerie similarities between the two disappearances. With self-doubt plaguing her and an almost instant dislike of the self-assured PI, she's finding this investigation an uphill battle. But with the prospect of finding her cousin on the horizon, she'll have to find a way to work with Alex--before it's too late.

Award-winning author Patricia Bradley keeps you on the edge of your seat with a case--and a relationship--that is anything but certain.

Patricia Bradley is the winner of a 2012 Daphne du Maurier Award and a 2012 Touched by Love Award and was also a finalist for the 2012 Genesis Award. The author of Shadows of the Past and A Promise to Protect, she is a member of American Christian Fiction Writers and Romance Writers of America. Bradley makes her home in Mississippi. Learn more at www.ptbradley.com.
Posted by Southern Gal at 9:55 PM