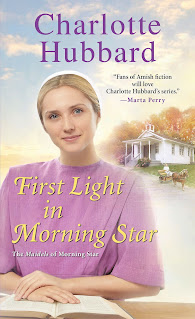 I'm always excited to start a new series from Charlotte Hubbard, as I expect to meet a new group of characters in a new setting and then get to explore in detail the stories of some of the individuals in that group. First Light in Morning Star is an awesome second installment in her newest series and one of my favorites of her books.
The basic premise of the Morning Star series is a refreshing one. The Marketplace that was dreamed up and organized by a close group of young Amish women has brought new direction and success for them and many others in their community.
Lydianne, who is one of those maidels, has a story that is quite an intriguing one. Not surprising with this author, you will find much forgiveness and compassion, a great deal of that being what Lydianne has to show for herself. Following the developments in the story is captivating and somewhat emotional, as you just can't be sure what will come next.
Besides the major emphasis on Lydianne, there is plenty in the storyline to keep the interest level high in the other characters, with hopes of learning more about them in future stories. And as Charlotte Hubbard is known to do, she also gives her die-hard fans a chance to revisit old friends from one of her other series.
I highly recommend First Light in Morning Star to fans of great Amish fiction. Thanks to the author for providing a copy of the book. I am happy to share my own thoughts in this review.

Founded by five enterprising Amish maidels, the new Morning Star Marketplace is a joyous success. What’s even more remarkable is the gift the business bestows upon each of these unmarried women—the unexpected blessing of love . . .

Leaving Flaud’s Furniture to teach at the community’s new school is a joy for Lydianne Christner. Old Order Amish, but new to Morning Star, she’s grateful that the congregation trusts her with the position—but she panics when handsome Bishop Jeremiah Shetler asks about the life she left behind. If anyone discovers the secret she’s hiding, she would, quite rightly, be shunned.

A widower, Bishop Jeremiah admires young Lydianne’s youthful energy and skill with the children. He’s also curious about her past, and the burden he senses on her heart. When his request to court her is refused, he’s stung, and lonelier than ever. It isn’t until a crisis prompts a tearful Lydianne to confess to him that Jeremiah is faced with a choice that requires all of his faith—and teaches them both that love and forgiveness go hand in hand.

Hope fluttered like a butterfly in Lydianne Christner’s heart as she parked her rig in the pole barn just north of the new white schoolhouse. It was barely dawn and she was more than an hour early for her interview with the members of Morning Star’s school board, but she needed time to collect her thoughts and plan her answers to the questions she anticipated from the five men who would decide her future. It had been a spur-of-the-moment decision when she’d blurted out her wish to apply for the teaching position at the members’ meeting after church a week ago—but in the days since, Lydianne’s soul had reconfirmed her impulsive outburst.

She really wanted this position. The trick would be replying to the school board’s questions without hinting at the very personal reason she wished to become Teacher Lydianne. Did she stand a chance?

Sighing nervously, Lydianne stepped onto the front stoop of the schoolhouse and opened the front door.

Her heart fluttered at the sight of fresh white walls, low-maintenance tan flooring, and rows of new metal desks and chairs—the front row filled with shorter desks for the youngest scholars. The white board that covered most of the wall behind her awaited whatever instructions she would write with a variety of colored markers, and the built-in bookcases at the back of the classroom would soon hold a small library as well as a collection of textbooks. Sturdy tables along the side walls would provide space for class projects. A stairway led to the lower level, where the scholars would hang their coats and store their lunch buckets when they came in each morning.

The prospect of beginning a new job—a new life—in this fresh setting filled Lydianne with an even greater excitement than she recalled from when she was a scholar, buying paper and supplies as she anticipated each new school year. Even at twenty-three, she loved learning new things and she eagerly looked forward to passing on her enthusiasm for reading, writing, and arithmetic to—

“Ah—gut morning, Lydianne,” a familiar male voice pulled her from her musings. “Somehow I’m not surprised that you arrived early.” 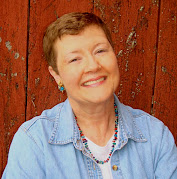 In 1983, Charlotte Hubbard sold her first story to True Story. She wrote around 70 of those confession stories, and she’s sold more than 50 books to traditional or online publishers. A longtime resident of Missouri, she’s currently writing Amish romances set in imaginary Missouri towns for Kensington. She now lives in Omaha, NE with her husband of 40+ years and their Border collie, Vera.

This post is part of a virtual book tour organized by Goddess Fish Promotions. Charlotte Hubbard will be awarding a $15 Amazon or B/N GC to a randomly drawn winner via rafflecopter during the tour. Click on the tour banner to see the other stops on the tour.