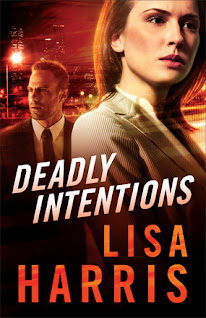 Recently I decided to take part in a reading challenge for this new year. The challenge for January was to read a book by a new-to-me author who was suggested as as a "copycat" of one of my favorites. When I mentioned several of my favorite romantic suspense authors, Lisa Harris was suggested. I decided to give her a try and picked up Deadly Intentions. I now owe a debt of gratitude to the person who made that recommendation.

It took about 3 or 4 paragraphs (if that much) to pull me in to this story, and I couldn't put it down! Thankfully, I didn't have much that had to be done on the day I started reading Deadly Intentions because almost all I accomplished that day was reading this book. It was a day well spent!

The suspense level stays high during the whole story. With plenty of suspects to choose from, there is plenty of room and time for guessing. The romance is a pretty slow and gentle, growing at a very comfortable level. There is an element of scientific research at the root of the story which provides an extra level of depth.

I highly recommend Deadly Intentions to fans of great romantic suspense. It is one of the author's stand-alone novels, so there is no worry about having missed anything in a series. This was my first book by Lisa Harris, but I doubt seriously that it will be my last!

There is no such thing as random.Research scientist Caitlyn Lindsey is convinced that someone is taking out her team one by one. First, a friend and research partner was killed in a home invasion. Three months ago, her boss died in a suspicious car accident. Four days ago, another partner supposedly committed suicide. And now Caitlyn herself has miraculously survived a hit-and-run. Afraid for her life with nowhere to turn, she reaches out to one of the victims' husbands, Detective Josh Solomon.Though initially skeptical about Caitlyn's theory, Josh soon realizes the attack that took his wife's life was anything but random. Now the two of them must discover the truth about who is after Caitlyn's team--and what their end game is--before it's too late. 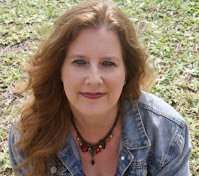 Lisa Harris is a USA Today bestselling author, a Christy Award winner, and the winner of the Best Inspirational Suspense Novel from Romantic Times for her novels Blood Covenant and Vendetta. The author of more than 40 books, including The Escape, The Traitor's Pawn, Vanishing Point, A Secret to Die For, and Deadly Intentions, as well as The Nikki Boyd Files and the Southern Crimes series, Harris and her family have spent over 17 years living as missionaries in southern Africa. She is currently stateside in Tulsa, Oklahoma. Learn more at www.lisaharriswrites.com.
Posted by Southern Gal at 3:55 PM