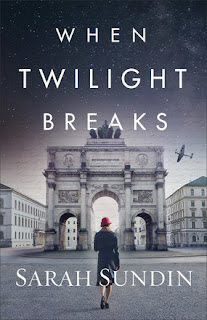 Eons ago when I was in high school, history was my least favorite subject, the one I took only because it was required, not for any useful purpose I could think of. So how is it that now historical fiction -- especially the stories with lots of real-life history in them -- has become one of my favorite genres?

OK, maybe maturity and life experience have contributed to my understanding of the value of history, but there is more to it than that. Brilliantly written stories filled with intensively researched historical facts really help to bring to life events and people from the past.

Sarah Sundin has written several awesome series from the WWII time period with fascinating fiction built around well-researched historical facts. When Twilight Breaks is a gripping story that goes back a little farther, to the years when tensions and conflicting ideologies were growing toward the ultimate point of war.

Evelyn and Peter are fascinating characters who come to life on the pages of this book. They, as well as others in the story, represent a cross section of the people who were caught up in the chaos and uncertainty of the time, especially those living and/or working in Germany itself. The people and actions are so well portrayed that I found myself feeling like I was right there with them. The historical details masterfully intertwined with the fictional story provide evidence of the level of in-depth research that this author does so well. And of course, there is a lovely thread of romance that adds another level to the story.

I highly recommend When Twilight Breaks to fans of great historical fiction, especially those intrigued by the WWII era. Thanks to Revell Reads for providing a copy of the book. I am happy to share my own thoughts in this review.

Munich, 1938Evelyn Brand is an American foreign correspondent determined to prove her worth in a male-dominated profession and to expose the growing tyranny in Nazi Germany. To do so, she must walk a thin line. If she offends the government, she could be expelled from the country--or worse. If she does not report truthfully, she'll betray the oppressed and fail to wake up the folks back home.Peter Lang is an American graduate student working on his PhD in German. Disillusioned with the chaos in the world due to the Great Depression, he is impressed with the prosperity and order of German society. But when the brutality of the regime hits close, he discovers a far better way to use his contacts within the Nazi party--to feed information to the shrewd reporter he can't get off his mind.As the world marches relentlessly toward war, Evelyn and Peter are on a collision course with destiny.

Sarah Sundin is the bestselling author of several popular WWII series, including Sunrise at Normandy, Waves of Freedom, Wings of the Nightingale, and Wings of Glory. Her novels have received starred reviews from Booklist, Library Journal, and Publishers Weekly. The Sky Above Us received the Carol Award, her bestselling The Sea Before Us received the FHL Reader's Choice Award, and both Through Waters Deep and When Tides Turn were named on Booklist's "101 Best Romance Novels of the Last 10 Years." Sarah lives in Northern California. Visit www.sarahsundin.com for more information.