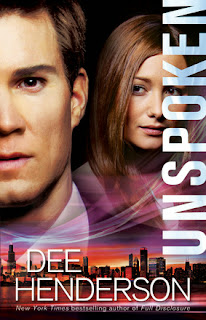 Unspoken, Dee Henderson's latest novel, is an enjoyable read, although lacking the high level of romance and suspense which drive her O'Malley Series and other earlier books.  The romance and suspense are both present, but they move at a much slower, more relaxed pace than might be expected from Dee.

A big part of the mystery in this story comes in “unwrapping” Charlotte, one of the main characters.  Details about her life – past and present – come out in small pieces, keeping a level of suspense throughout the story.  The book is a bit long and has places where the details about coin collecting and dealing with tremendous wealth do tend to slow down the pace a bit too much.

Although this book is not part of a series, anyone who has read Full Disclosure will find familiar characters as Ann and Paul Falcon show up in major roles in this story.

All in all, I would recommend Unspoken as a good read for Dee Henderson fans.

Thanks to Bethany House for providing me this book in exchange for my honest review.

Charlotte Graham is at the center of the most famous kidnapping in Chicago history.

The task force of FBI and local cops found her two abductors, killed them, rescued her, but it took four very long years. The fact she was found less than three miles from her home, had been there the entire time, haunts them. She's changed her identity, found a profession she loves, and rebuilt her life.

She's never said a word--to the cops, to her doctors, to family--about those four years.

A family legacy has brought her back to Chicago where a reporter is writing a book about the kidnapping. The cops who worked the case are cooperating with him. Her options are limited: Hope the reporter doesn't find the full truth, or break her silence about what happened. And her silence is what has protected her family for years.

Bryce Bishop doesn't know her past, he only knows she has coins to sell from her grandfather's estate--and that the FBI director for the Chicago office made the introduction. The more he gets to know Charlotte, the more interested he becomes, an interest encouraged by those closest to her. But nothing else is working in his favor--she's decided she is single for life, she struggles with her faith, and she's willing to forego a huge inheritance to keep her privacy. She's not giving him much of an opening to work with.

Charlotte wants to trust him. She needs to tell him what happened. Because a crime cops thought was solved, has only opened another chapter...

Dee Henderson is the author of eighteen novels, including Jennifer: An O'Malley Love Story, New York Times bestseller Full Disclosure, the acclaimed O'Malley series, and the Uncommon Heroes series. Her books have won or been nominated for several prestigious industry awards, such as the RITA Award, the Christy Award, and the ECPA Gold Medallion. Dee is a lifelong resident of Illinois.
Learn more at www.deehenderson.com.
Posted by Southern Gal at 5:53 PM