Great romantic suspense collection -- Sins of the Past 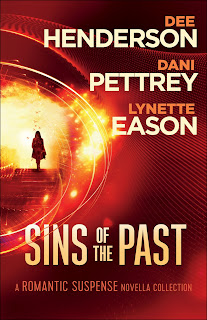 The three authors' names on the front cover of this book were all I needed to guarantee that it would be a great collection of romantic suspense stories -- and I was not disappointed at all with Sins of the Past!

The three stories -- while very different in intensity level and storytelling style -- have a couple of things in common.  Each was written by one of the greats in the world of inspirational romantic suspense.  And each is a page-turner, keeping you guessing as you follow the main characters through life and death situations that evolve along with romance and some growth in faith.  As is necessary in the shorter novellas, both the romance and the suspense happen pretty fast, so hold on tight for the ride!

The title is a great fit, as each story is somehow connected to events from the past that have never really been laid to rest.  I don't know of any connection to other books by Dee Henderson or Lynette Eason, but fans of Dani Pettrey's Alaskan Courage series should enjoy the backstory of the McKenna family.

Thanks to Dani Pettrey and her publisher for sending me a copy of this book.  I am pleased to return the favor with an honest review.

Secrets and Lies. Danger That Will Never Go Away.
Join Three Beloved Masters of Romantic Suspense for Novellas Where the Past Will Not Stay Buried.

Dee Henderson - "Missing"A Wyoming sheriff is called to Chicago when his elderly mother goes missing from her retirement community. Paired with a savvy Chicago cop, the two soon launch into a race against the clock when they realize something dark may lie at the heart of the disappearance.

Dani Pettrey - "Shadowed"Adventure, romance, and danger collide when a young Alaskan fisherman nets the body of a Russian open water swimming competitor. Another swimmer, who'd been the dead woman's roommate years ago, is pulled into the search for answers as it grows more and more clear that something sinister is at play.

Lynette Eason - "Blackout"A young woman once implicated in a robbery gone wrong finds herself at risk years later when the real culprit is up for parole. The loot taken that night has never been found and he believes she knows where it's hidden--only her memory of that night has always been unreliable. Can she remember enough to find her way to safety?

Dee Henderson is the author of numerous novels, including Taken, Undetected, Unspoken, Full Disclosure, and the acclaimed O'Malley and Uncommon Heroes series. Her books have won or been nominated for several prestigious industry awards, such as the RITA Award, the Christy Award, and the ECPA Gold Medallion. Dee is a lifelong resident of Illinois. Learn more at www.deehenderson.com.

Dani Pettrey is a wife, home-schooling mom, and the acclaimed author of the Alaskan Courage romantic suspense series, which includes her bestselling novels Submerged, Shattered, Stranded, Silenced, and Sabotaged. Her books have been honored with the Daphne du Maurier award, two HOLT Medallions, two National Readers' Choice Awards, the Gail Wilson Award of Excellence, and Christian Retailing's Best Award, among others.

She feels blessed to write inspirational romantic suspense because it incorporates so many things she loves--the thrill of adventure, nail-biting suspense, the deepening of her characters' faith, and plenty of romance. She and her husband reside in Maryland, where they enjoy time with their two daughters, a son-in-law, and a super adorable grandson. You can find her online at danipettrey.com.

Lynette Eason is the bestselling author of the Women of Justice series, the Deadly Reunions series, and the Hidden Identity series, as well as Always Watching and Without Warning in the Elite Guardians series. She is the winner of an ACFW Carol Award, the Selah Award, and the Inspirational Readers' Choice Award. She has a master's degree in education from Converse College and lives in South Carolina. Learn more at www.lynetteeason.com.