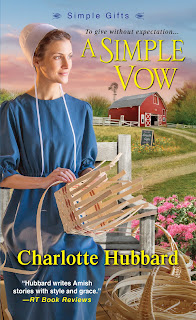 Charlotte Hubbard's A Simple Vow is a great start to her Simple Gifts series.  If you are already a fan of her books (and if not, you really should be), you may recognize some "old friends" as she takes us back to the fictional Amish community of Willow Ridge, Missouri.

As usual, some of Charlotte's characters stretch the limits of the most conservative Amish factions and find themselves in some interesting -- and sometimes sticky -- situations.  A new family has moved to town, a somewhat secretive and stern deacon with his three unmarried daughters; and their lives get pretty complicated with the addition of twin infants and some young Amish men from out of town.

Charlotte outdid herself with a plot twist that caught me completely off guard.  I will avoid spoilers and just say you will have to read the story for yourself.  And even as the main story wraps up at the end of the book, there are questions to carry over into the next installment in the series.

This new Simple Gifts series promises to be another great set of stories.  You can definitely enjoy them on their own, but if you're interested in background details, I would highly recommend you check out Charlotte's Seasons of the Heart books.

Fans of great Amish fiction should enjoy The Simple Vow.  Thanks to the author for providing a copy in exchange for my honest review.

Housed in a rustic red barn, the Simple Gifts crafts shop celebrates the talents of the Amish of Willow Ridge—and the faith that inspires them. For the acceptance of simplicity opens the path to love.

As far as Edith Riehl is concerned, the baby twins thrust suddenly into her arms are a heaven-sent gift. Unable to conceive, she longs to be a mother with a home of her own. She’s going to abide by her promise to handsome Asa Detweiler to take care of them while he looks for their real father. And even if her domineering dat Cornelius refuses to countenance Asa’s suit, she can only pray the bachelor’s honesty and persistence will uncover the truth—even as he’s kindled an impossible hope for a love of her own…

Asa can’t understand why anyone would think he would be so dishonorable as to father babies and then abandon them. He’s determined to clear his name—but Edith’s caring ways also inspire him to help heal her wounded spirit and earn her trust. In the face of heartbreaking deception, he and Edith must find the strength to understand, forgive…and claim their own hearts’ joy.

Read an Exclusive Excerpt from the Book:

He halted the horse at the end of their lane. When Edith grabbed the basket handles and started for the porch, Will followed her with a large cardboard box. “You’re a godsend, Edith—an angel—and I can’t thank you enough,” he murmured. “I’ll come back as soon as I can, after Molly’s funeral.”

She nodded mutely, wondering how on earth she would explain to her family about the monumental responsibility she’d just taken on. “So, what are the babies’ names? Are they boys or girls or—”

“One of each. Leroy and Louisa.” Will kept his eyes on her, as though he couldn’t bear to look at the children he apparently hadn’t fathered. “They were born October tenth, so they’ll be six months old tomorrow, and—well, you probably think I’m already a total failure as a father. Give Loretta my best.”

As Edith walked to the end of the porch to watch Will’s rig roll down the road, she sighed. She’d put on her best purple dress to attend the wedding, and now she’d accepted two babies and a box filled with whatever Will had tossed into it. What were you thinking? What sort of mess have you gotten yourself into? How long will it be before Will comes back—and what if he doesn’t?

Edith’s whirling thoughts were interrupted by the tattoo of boots on the porch steps. She turned to find the raven-haired stranger studying her intently. He removed his straw hat.

“My name’s Asa Detweiler and I live in Clifford—south of Roseville about twelve miles,” he said in a low voice. He ducked slightly so that his eyes were level with hers, mere inches away. “I swear to you that I never met Will’s wife—never saw him before today, when his phone message accused me of fathering these twins, so I tracked him down. Can you believe that, Edith?”

She blinked. Asa Detweiler told a compelling story and had the voice and eyes to back it up. But what did she know about any of the stories she’d heard this morning?

Asa smiled wryly. “I admire a woman who doesn’t blurt out the first thing that comes to mind—and who has put the needs of these two babies first,” he added. “I promise you I’ll get to the bottom of this situation, and I’ll be back. Promise me that you’ll mother these kids—and that you’ll hear me out when I return, all right?”

Edith couldn’t help gazing into his eyes, as dark blue and mysterious as midnight. Even as she nodded, she sensed that Asa’s request, and her unspoken affirmation—such a simple vow—would change her life in ways she couldn’t possibly predict. 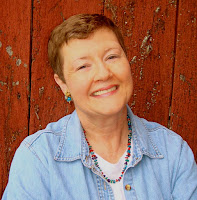 Many moons ago—like, in 1983 while she was still a school librarian—Charlotte Hubbard sold her first story to True Story. This launched her into writing around seventy of those “true confessions” stories over the years, and she’s been a slave to her overactive imagination ever since. Over the course of her writing career, she has sold nearly 50 books—most recently, Amish romance series she’s written as Charlotte Hubbard or Naomi King.

Charlotte lived in Missouri for most of her life, so her Amish stories are set in imaginary Missouri towns. These days she lives in St. Paul, MN with her husband of 40+ years and their Border collie, Ramona.

Follow Charlotte's Excerpt Tour through July 29 to learn more about A Simple Vow.  Read the blog posts and comment often to increase your chances in her giveaway of a $15 Amazon or Barnes and Noble gift card.  You can enter HERE!  Winner will be randomly drawn via rafflecopter during the tour.
Posted by Southern Gal at 10:50 PM