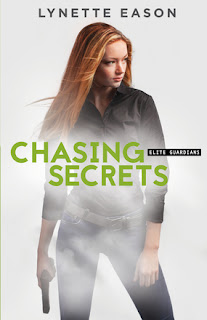 Each book in Lynette Eason's Elite Guardian series has been awesome -- and Chasing Secrets is the best of all!

The women -- and man -- of the Elite Guardian agency are great at what they do, even when it is one of their own who needs their help.  The suspense and action move at just the right pace, and there is plenty of time for taking care of other folks . . . and a little romance on the side.

Chasing Secrets would be great as a stand-alone, but why not check out the whole series?  I think you will be glad you did!

Intensity. Skill. Tenacity.
The bodyguards of Elite Guardians Agency have it all.

When a photo leads investigators in West Ireland to open a twenty-five-year-old cold case, Elite Guardians bodyguard Haley Callaghan's life is suddenly in danger. Haley knows how to take care of herself; after all, she's made a career out of taking care of others. But after she has an uncomfortably close call, Detective Steven Rothwell takes it upon himself to stay with her--and the young client she has taken under her wing. A protector at heart, he's not about to let Haley fight this battle alone.

In a sweeping plot that takes them into long-buried memories--and the depths of the heart--Haley and Steven will have to solve the mystery of Haley's past while dodging bullets, bombs, and bad guys who just won't quit.

Lynette Eason is the bestselling author of the Women of Justice series, the Deadly Reunions series, and the Hidden Identity series, as well as Always Watching, Without Warning, Moving Target, and Chasing Secrets in the Elite Guardians series. She is the winner of two ACFW Carol Awards, the Selah Award, and the Inspirational Readers' Choice Award. She has a master's degree in education from Converse College and lives in South Carolina. Learn more at www.lynetteeason.com.