Not so simple story -- A Simple Wish 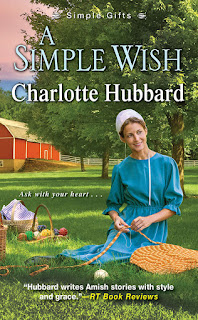 Don't be fooled by the title of Charlotte Hubbard's latest book -- A Simple Wish. The wish might be simple, but the story is not.

Like her other books set in real and fictional Missouri towns, Charlotte Hubbard has written another story that doesn't quite fit the cookie-cutter style of Amish romance. She has strong females lead out in situations that usually get a little -- or maybe a lot -- complicated and don't always have a resolution that would fit a stereotypical Amish community.

Reading the first book in the series, A Simple Vow, is pretty much a necessity to understand a lot of the story line in this one.  And if you've read Charlotte's Seasons of the Heart series, you will find several "old friends" who carry over into these stories.

Amish fiction fans should enjoy this story and will be left wanting more, as there are several loose ends that will likely be tied up in the next book.

As a word of caution to readers, there are a couple of off-color words used in one conversation in the story -- something a little unexpected in this type of story.

Thanks to Charlotte for providing me with a copy of A Simple Wish. I was glad to share my own thoughts in this review.

Making rugs for the Simple Gifts store has taught Loretta Riehl that an unassuming pattern can reveal surprising depth. People, too, have a way of defying first impressions. Drew Detweiler came to Willow Ridge under a cloud, but the  handsome craftsman has gained the community's respect for his upholstery skills and commitment to making amends for his mistakes. As her new brother-in-law's twin, he's joining the family for dinners and Sunday visits, and Loretta can't deny enjoying his attentions.

If only  her dat were willing to let a little joy into his life. Cornelius Riehl grows sterner with each day, and Drew suspects there's more to his moods than missing Loretta's late mamm. Hoping to fulfill Loretta's wish to live in a  peaceful, happy home again, Drew sets out to learn the truth. It's a journey that will bring to light painful realities—but also the chance to forge a new, honest, and loving future together...

Excerpt from the Book:

When Loretta looked across the road, she noticed that one of the Detweiler brothers was coming out of the stable in an open buggy pulled by a tall black Percheron. Asa and Drew, identical twins, owned matching horses, so it was impossible to tell which one of them was heading down the long lane toward the road.


She held her breath. Was it her imagination, or was the driver of that buggy looking right at her?

“I—I’ve never forgiven myself for turning my back on the love we shared, Loretta,” Will said again. He stopped the swing so suddenly that Loretta’s long, loose strips of rug fabric fluttered to the porch floor. “We both knew we had a love that would see us through a lifetime together. I was so upset about your Dad splitting us up that I didn’t realize Molly was coming on to me too fast, too soon,” he lamented, gazing at her with the soft brown eyes of a begging dog. “I am so sorry, Loretta.”

Loretta was feeling more unsettled by the second, because Will’s soul baring was leading her down a path she no longer wanted to follow. How could she tell him she wasn’t interested in rekindling their relationship? It would break his heart and depress him further while he still mourned the death of his wife and their misguided marriage.

Sighing, she chose her words carefully. “God has a reason for everything He does—every stumbling block He places in our paths—”

“But I see the world so clearly now!” Will blurted out. “I’ve prayed over these things night and day since Molly died and left me with her six-month-old twins. And while I never wished such a horrible death from cancer would take her, it gave me hope that you and I could—”

Loretta stood up, dropping her unfinished rug onto the swing between them. As the Detweiler buggy approached the road, coming toward her, she realized that Drew surely must be driving because Asa and Edith were inseparable—they went everywhere together and took the twins with them, in their baskets. Her pulse quickened. Drew was gazing right at her, pulling out of the Detweilers’ lane and stopping the buggy on the roadside in front of her.

“Loretta, I’ve got a gut steady job now, farming for Luke and Ira Hooley,” Will was saying, oblivious to the buggy. “Soon I’ll be planting a vineyard for them—can you imagine that? And I’ll be asking the Brenneman brothers to build us a house—”

“Hey there, Miss Loretta!” Drew called out from the buggy. “I have an errand to run. Want to come along?”

For a moment, Loretta felt lower than a worm, but she couldn’t allow Will to believe he could take up where they’d left off. He hadn’t heard a word she’d said as she’d gently countered his suggestions. Loretta nipped her lip, glancing apologetically at the handsome young man who’d gone through such an ordeal these past several months. Without a word, she hurried down the porch steps and across the front yard toward Drew Detweiler. 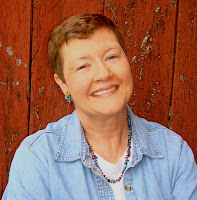 Charlotte Hubbard is the acclaimed author of Amish romance and fiction that evokes simpler times and draws upon her experiences in Jamesport, the largest Old Order Amish community west of the Mississippi. Faith and family, farming, and food preservation are hallmarks of her lifestyle—and the foundation of all her novels. A deacon, dedicated church musician and choir member, she loves to travel, read, try new recipes, and crochet. A longtime Missourian, Charlotte now lives in St. Paul, Minnesota, with her husband and their border collie, Vera. Please visit Charlotte online at www.CharlotteHubbard.com or on Facebook www.Facebook.com/Charlotte.Hubbard1

Charlotte Hubbard will be awarding a $10 Amazon or Barnes and Noble gift card to a randomly drawn winner via rafflecopter during the tour.

a Rafflecopter giveaway
Posted by Southern Gal at 12:30 AM