Mail-order brides -- Beneath a Prairie Moon 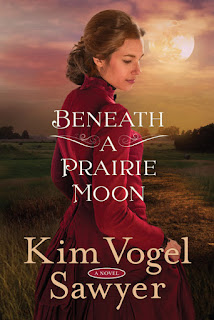 If you have followed my reviews at all, you should have picked up that Kim Vogel Sawyer is one of my favorite authors. She tells stories (frequently historicals set in her home state of Kansas) of hardship, struggles, love, and faith in a way that tug at the heart strings. Before the story is over, I have usually laughed, cried, and felt like taking some of the characters and "shaking some sense into them."

Beneath a Prairie Moon is everything I have just described. The setting involves a kind of rough and tumble town that is short on females of marriageable age, which prompts many of the unrefined men of the town to send letters and money back East for the purpose of securing mail-order brides. When the manager of the bride service and her assistant make the long trek to Kansas, Eastern high society meets the unpolished prairie and all kinds of consequences develop. There is a lot of uncertainty and hard-headedness, and even some pretty dangerous situations. Before all is said and done, love shows itself in many forms -- expected and unexpected.

As always, I highly recommend Kim Vogel Sawyer's latest book to all fans of great inspirational fiction. Thanks to Kim and her publisher for providing a copy of the book.  I am happy to share my own thoughts in this review.

Abigail Brantley grew up in affluence and knows exactly how to behave in high society. But when she is cast from the social registers due to her father's illegal dealings, she finds herself forced into a role she never imagined: tutoring rough Kansas ranchers in the subjects of manners and morals so they can "marry up" with their mail-order brides. Mack Cleveland, whose father was swindled by a mail-order bride, wants no part of the scheme to bring Eastern women to Spiveyville, Kansas, and he's put off by the snooty airs and fastidious behavior of the "little city gal" in their midst. But as time goes by, his heart goes out to the teacher who tries so diligently to smooth the rough edges from the down-to-earth men. How can he teach her that perfection won't bring happiness?

KIM VOGEL SAWYER's titles have garnered awards including the ACFW Carol Award, the Inspirational Readers Choice Award, and the Gayle Wilson Award of Excellence. Kim lives in central Kansas with her retired military husband Don. She enjoys spending time with her three daughters and a bevy of grandchildren.
Posted by Southern Gal at 4:58 PM