Powerful true story of faith -- I Will Not Fear 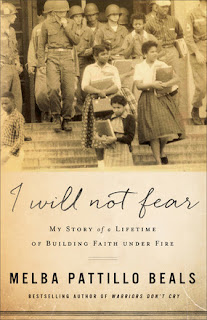 In her I Will Not Fear, Melba Pattillo Beals shares some details of the frightening, dangerous time she endured as a 15-year-old during the integration of an all-white high school. But she goes far beyond those days to share how the lessons of faith she learned during that critical time -- as well as before and after those events -- have served her well throughout her whole life.

Being from Arkansas, I have heard for years about the "Little Rock Nine" and their efforts to integrate Central High School in Little Rock. I attended junior high and high school almost twenty years later in another Arkansas town where integration was still very much a difficult and frightening issue. Those connections were much of what drew me to read this story.

The details from those first days of attending Central High School, the threats on the lives of those students and their families, and even the offensive treatment by members of their own community brought real life to an event from the history books. As the story progresses, the author takes readers far beyond those events into the places where her life went after she left Little Rock and faced many other challenges. One of the constants, no matter where she went and what she faced, was her faith in God, influenced tremendously by her grandmother's teachings from early on.

I recommend this book to anyone interested in the history involved or anyone looking for encouragement to remain strong in the face of life's big obstacles.

Thanks to Revell for providing a copy of this book.  I am happy to share my own thoughts in this review.

In 1957, Melba Beals was one of the nine African American students chosen to integrate Central High School in Little Rock, Arkansas. But her story of overcoming didn't start--or end--there.

While her white schoolmates were planning their senior prom, Melba was facing the business end of a double-barreled shotgun, being threatened with lynching by rope-carrying tormentors, and learning how to outrun white supremacists who were ready to kill her rather than sit beside her in a classroom. Only her faith in God sustained her during her darkest days and helped her become a civil rights warrior, an NBC television news reporter, a magazine writer, a professor, a wife, and a mother.

In I Will Not Fear, Beals takes you on an unforgettable journey through terror, oppression, and persecution, highlighting the kind of faith we all need to survive in a world full of heartbreak and anger. She shows how the deep faith we develop during our most difficult moments is the kind of faith that can change our families, our communities, and even the world.

Encouraging and inspiring, her story offers hope that faith is the solution to the pervasive hopelessness of our current culture.

Melba Pattillo Beals is a recipient of this country's highest honor, the Congressional Gold Medal, for her role, as a 15-year-old, in the integration of Central High school in Little Rock, Arkansas. A retired university professor with a doctorate in International Multicultural Education, she is a former KQED television broadcaster, NBC television news reporter, ABC radio talk show host, and writer for various magazines, including Family Circle and People. Beals's Warriors Don't Cry has been in print for more than 20 years, has sold more than 1 million copies, and was the winner of the American Library Association Award, the Robert F. Kennedy Book Award, and the American Booksellers' Association Award. She lives in San Francisco and is the mother of three adult children.