I didn't see THAT coming! -- Not in the Heart 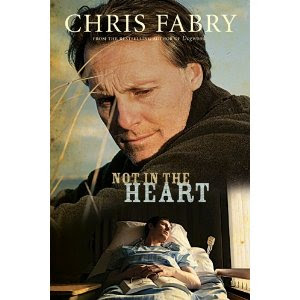 Truman Wiley is an out-of-work journalist with lots of problems -- a gambling addiction that has led to a dangerous level of debt, a family he has neglected for so long that he has lost any chance of reconciliation, an aversion to anything that has even a remote connection with God.  His 18-year-old son is dying from a life-long heart condition, and the only hope he has for survival is a heart transplant from a man about to be executed for murder.  Truman is approached by the convicted man's wife to write a book, tell his story.  As Truman gathers information for the story, evidence points more and more toward the possibility of a different killer.  Truman is faced with a life-or-death dilemma:  should he allow a man who may be innocent to die so that his own son can live, or should he follow the truth?

Fabry presents most of the story in first person in Truman's voice, and that voice is pretty negative.  Truman's life is a mess -- mostly from his own choices -- and that skews his outlook on other people, particularly those who believe in a loving God.  There were a couple of times early on in the story when I had a little trouble going with the flow and wondered if the book was worth my time.  But am I ever glad I chose to stick with it!

If you want a quick and easy, feel-good read, this may not be your best choice.  But for a story that draws you in to some tough issues, while at the same time leading you and his characters to a realization of redemption and mercy in the workings of God, I highly recommend Not in the Heart.

A complimentary advanced reader copy of this book was provided by Tyndale Publishing in exchange for my honest review.
Posted by Southern Gal at 10:36 PM