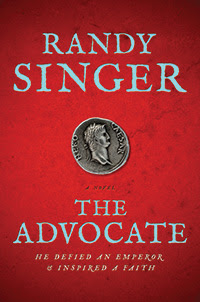 The Advocate is quite different from Randy Singer's usual contemporary legal thrillers.  It is historical fiction set in New Testament times, with both real and fictional characters as well as real and fictional events.  It was a story, though, that I found very intriguing.

While the details came from a mixture of Biblical facts, historical facts, and fictional thoughts from the author's mind, the story helped bring to life some of what the world was like where Jesus, Paul, and other New Testament people lived.  Whether or not the Theophilus Luke mentioned in his writings actually came into contact with Pontius Pilate, Paul, or Jesus, imagining the events from his perspective made for a very compelling story.

At the trial of Christ, Theophilus, brilliant young "assessore" raised in the Roman aristocracy, stands behind Pontius Pilate and whispers, "Offer to release Barabbas." The strategy backfires, and Theophilus never forgets the sight of an innocent man unjustly suffering the worst of all possible deaths--Roman crucifixion. Three decades later, Theophilus has proven himself in the legal ranks of the Roman Empire and has an opportunity for redemption. He takes the case of Paul of Tarsus, defending the outspoken apostle in front of Nero, Rome’s cruelest tyrant. Can Theophilus mount a defense that will keep another innocent man from execution? The advocate's first trial altered the course of history. His last will change the fate of an empire.

Veteran lawyer-author Singer (The Last Plea Bargain) uses the idea advanced elsewhere that the Bible books Luke and Acts were written as legal briefs to defend the Apostle Paul against the Roman emperor Nero. The two biblical books are addressed to an enigmatic Theophilus, (a name meaning "lover of God,") and Singer develops a fictional Theophilus, a lawyer who stood behind Pilate to advise him to offer up Jesus Christ to be crucified. Theophilus witnesses the lives of Jesus and Paul unfold, and has to decide based on the evidence whether to join the early movement of Jesus followers and become a victim of the great persecution of Nero. Some of the dialog comes directly from Scripture; other speeches are faithful to biblical characters such as Paul: "The most important thing is not that the letter proclaims my innocence but that it proclaims the good news about the Messiah."

Cross James Michener's great historical fiction with a John Grisham legal thriller, and you've got this epic classic by Singer.

He has penned more than 10 legal thrillers and was recently a finalist with John Grisham and Michael Connelly for the inaugural Harper Lee Prize for Legal Fiction sponsored by the University of Alabama School of Law and the ABA Journal. Randy runs his own law practice and has been named to Virginia Business magazine's select list of "Legal Elite" litigation attorneys. In addition to his law practice and writing, Randy serves as teaching pastor for Trinity Church in Virginia Beach, Virginia. He calls it his "Jekyll and Hyde thing"—part lawyer, part pastor. He also teaches classes in advocacy and civil litigation at Regent Law School and, through his church, is involved with ministry opportunities in India. He and his wife, Rhonda, live in Virginia Beach. They have two grown children.

Visit his website at www.randysinger.net.
Posted by Southern Gal at 10:27 PM